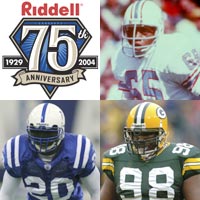 The Best of Yesterday and Today autograph series, presented by Riddell, continued at the Hall of Fame on Saturday May 8.

Several hundred fans, many of whom arrived in the early hours of the morning, greeted Class of 2003 inductee Elvin Bethea, and current NFL rising stars Mike Doss of the Indianapolis Colts and the Green Bay Packers Kenny Peterson.

Bethea, a star defensive end for the Houston Oilers for 16 seasons was inducted into the Pro Football Hall of Fame last August.

Doss and Peterson were high school teammates at Canton's McKinley High School and played many memorable games at Fawcett Stadium, home of the AFC-NFC Hall of Fame Game.  The duo went onto Ohio State and were key components to the Buckeyes' national championship in 2002.

Bethea, Doss, and Peterson signed and greeted fans for three hours in the Hall's NFL Films theater from 9:00 a.m. to 12:00 noon on Saturday.

The Best of Yesterday and Today series continues on Saturday May 22 with Hall of Fame guards Joe DeLamielleure and Billy Shaw as well as Cleveland Browns quarterback Jeff Garcia on hand to sign autographs from 11:00 a.m. to 2:00 p.m.

2004 Best of Yesterday and Today