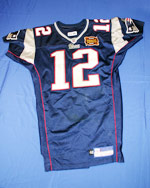 The jersey worn by Super Bowl XXXVIII Most Valuable Player Tom Brady of the New England Patriots arrived at the Hall of Fame on Wednesday morning.  It was placed on display in the Super Bowl Experience exhibit. 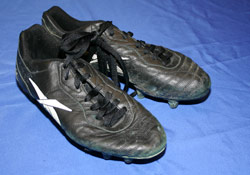 Brady's jersey now joins several other mementos from the Patriots' exciting 32-29 win over the Carolina Panthers in Super Bowl XXXVIII.

Other items on display include the shoes worn by kicker Adam Vinatieri (right) when he booted the game-winning field goal with four seconds remaining in the game played in Houston on February 1, 2004.  The shoes arrived on Tuesday and were presented to Hall of Fame President John Bankert by New England linebacker Mike Vrabel (More: Vrabel at Hall for GameDay debut)

A ball signed by Brady, another football that includes all the signatures of the Panthers players, and the coin used in the pre-game toss were previously on display in the exhibit.

Massachusetts Senator John Kerry took time to visit the Pro Football Hall of Fame on Friday afternoon. The Democratic Presidential hopeful was on the campaign trail and made a stop in Canton.

Vrabel at Hall for GameDay debut

New England Patriots linebacker Mike Vrabel was at the Hall of Fame on Tuesday night for the premiere of the updated <i>Championship Chase</i> film which now features the Patriots' exciting Super Bowl XXXVIII victory over the Carolina Panthers.