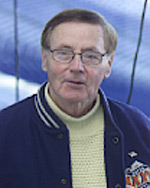 The Pro Football Hall of Fame has received mementos from the last broadcast of Buffalo Bills' radio play-by-play announcer Van Miller (left).  The long-time voice of the Bills broadcast his final game on Saturday December 27th at New England.

In what is the longest tenure of any local radio announcer in National Football League history, Miller served as the Bills' voice for 37 seasons.

Miller, the original play-by-play man for the Bills in 1960, has called the action every season except for the 1972-78 seasons when his station lost the broadcast rights to the team.

The headset that Miller used for the Bills-Patriots regular season finale as well as his spotter boards were donated to the Hall of Fame and have been added to the museum's vast collection.

Other recent additions to the Hall's collection

Each year, many new mementos are placed on exhibit in the Hall of Fame to help tell pro football's story.

Clippings on the Class of 2004