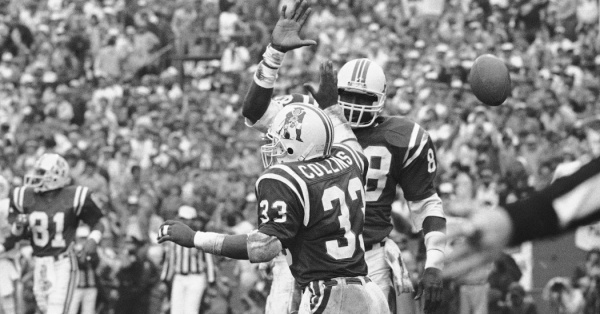 The road to Super Bowl XX for the 1985 New England Patriots was well traveled. After posting an 11-5 regular season record that included winning nine of their final 11 games, the Patriots qualified for the playoffs as a wildcard team. Over the next month, the team fought incredible odds as they won three consecutive playoff games, all on the road!

One week later, the Patriots traveled to the west coast to battle the Raiders at the Los Angeles Coliseum. Again, turnovers played a major role as the Patriots stunned Los Angeles with a 27-20 upset win. New England forced six turnovers that contributed to 20 points. The offense was powered by running back Craig James who rushed for 104 yards on 23 carries as he became the first back to rush for 100 yards against the Raiders all season. The special teams unit delivered the winning score when the Patriots' Mosi Tatupu nailed Sam Seale on a third quarter kickoff return. The ball squirted from Seale's hands and rolled toward the end zone where rookie Jim Bowman fell on it for the touchdown, his second fumble recovery of the game. New England protected their lead and earned a berth in the AFC championship game. The playoff run began on December 28 at Giants Stadium against the New York Jets. The Patriots went on a tear that day as they scored 20 unanswered points during a stretch of the second and third quarters. Seventeen of those points followed Jets' miscues. The Pats defense forced a total of four turnovers in the game. Combined with a record-tying four field goals by place-kicker Tony Franklin, the Patriots rolled to 26-14 win.

The miracle run continued as the Patriots again ignored overwhelming odds and upset the Dolphins. Turnovers, for the third consecutive week, were the deciding factor as the Patriots added four fumbles and two interceptions to their playoff totals. The Pats' offense – led by quarterback Tony Eason who completed 10 of 12 passes and threw three touchdowns – converted four of those turnovers into 24 points. New England breezed to a 31-14 win and their first trip to the Super Bowl.

Even though New England went down to defeat against the Bears in Super Bowl XX, the wild ride to get there still ranks as some of the finest moments in franchise, if not league, history.

Twenty-six members of the NFL community have been war casualties, including 23 in World War II.

Will 2019 be the year that some of the NFL's oldest records fall? No player has been able to score more points in a game than Ernie Nevers did on Nov. 28, 1929. His mark is the oldest NFL record.