In his second season in 1972, Ham developed into a full-fledged star. He intercepted seven passes and recovered four opponents' fumbles that year as the Steelers marched to their first AFC championship game. His successful ball-hawking prompted one reporter to write: "Ham reacts to loose footballs with the same enthusiasm and unerring instincts pigeons bring to statues." During his career, he totaled 32 interceptions and 19 opponents fumbles recovered.

A year later in 1973, Ham was All-NFL for the first time. He repeated as a virtually unanimous all-pro pick for six more years through the 1979 season. In 1975, he was named the NFL Defensive Player of the Year. He was also selected for eight straight Pro Bowls. He was the only unanimous choice on the NFL's Team of the Decade.

While Ham had the reputation of being a defender who could finesse his opponents into submission, he could nevertheless "hit" with the best in the NFL. He actually was a graceful all-around athlete who once high-jumped 6-feet-3 3/4 inches. He could dunk a basketball and sprint 40 yards in under five seconds.

There was little in his teenage years, however, to give any hint that Jack would ever be an all-time great pro football player. At Bishop McCourt High School in Johnstown, PA, where he was born on December 23, 1948, Ham was a third-string offensive tackle as a sophomore, a regular offensive tackle as a junior and only in his senior year did he take a shot at linebacking.

Virginia Military Institute showed some interest in Ham but since he weighed only 185 pounds recommended he spend a year at Massanutten Military Academy prep school in Virginia. "I got a lot of good football experience," he admits, "but I also realized I didn't like the military life and I couldn't bear the thought of four years at VMI."

A few small colleges offered Jack scholarships but he wasn't interested. "At that point, football still wasn't very important to me. I didn't feel my playing had improved noticeably and I had absolutely no illusions about playing pro or even college football. I decided to attend Penn State as a student only." 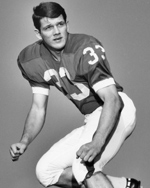 But a Penn State freshman who had been a high school teammate recommended Ham to the Nittany Lion coaching staff. Jack eventually was offered the last scholarship Penn State had available that year.

Coach Joe Paterno didn't see Ham play in 1967, as freshmen were not eligible. But once he spotted Jack as a sophomore, he knew he had found a future star. Ham had grown to All-America stature by his junior season.

Ham, used to winning teams at Penn State, was not particularly happy when the Steelers drafted him. "Goal-wise, I didn't come into the league to be an all-pro," he said, "but I do like to play on a winning team. That's what makes it all worth while. I never had experienced a 5-9 season and I didn't want to start in the pros."

As it was, the Steelers finished below .500 just once - in Jack's 1971 rookie season - over the next 12 seasons. Starting in 1972, they won seven AFC Central championships in eight years and became the first team to win four Super Bowls. Except for Super Bowl XIV when he was injured. Ham played a major role in 11 of Pittsburgh's unprecedented successes.

Jack had already attained his big-play reputation by the time he joined the Steelers. Veteran observers like to recall the time with the Nittany Lions when he intercepted a pass with one hand at point-blank range while he prepared to tackle the quarterback on a blitz. Later with the Steelers, he saw extensive duty on the special teams because he was a constant threat as a kick-blocker.

Ham was never comfortable with the big-play tag. "I prefer to play consistent, error-free football," he said. "If you're doing your job well and defending your area, you might not get tested that often, or get a chance to make big plays."

Jack saw himself as just one cog in a smooth, efficient defensive machine. "If I had been with another team," he pointed out, "I might not have been thought of in the same light. We have a unique type of defense and it is honed around the kind of talent we have."

While he responded courteously to reporters' queries, Ham never sought publicity and was really uncomfortable whenever people told him he was the best. Nevertheless, football was king in Pittsburgh in the 1970s and Ham was one of the most popular of the Steelers. Enthusiastic rooters even formed the "Dobre Shunka" fan club. Dobre Shunka is Slovak for "Great Ham."

Jack was introduced first hand to Steeler-mania in another unique way. He and his fiancée Joanne Fell (now his wife of over 20 years) were attending a Sunday evening mass in a suburban church when the monsignor suddenly proclaimed: "How about those Steelers?"

He asked if Steeler president Dan Rooney was in attendance. Rooney wasn't there but a parishioner stood up and announced that Ham was. 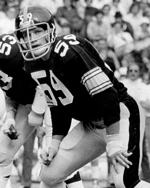 "It was really something," Jack recalls. "They gave me a big ovation just like we were out at the stadium. I even stayed after mass and signed autographs."

Seemingly indestructible, Jack missed only three of his first 129 games as a pro.

But in a Monday night showdown with the Oilers in Houston late in the 1979 season, Ham suffered a dislocated toe in his left foot and had to miss the rest of the season, including the Steelers' 31-19 triumph over the Los Angeles Rams in Super Bowl XIV.

He worked tirelessly the next summer to get back in shape and while he returned to a level of proficiency that would have satisfied most NFL players, Ham, his own worst critic, knew it was not up to the standards he had set for himself.

Jack gave a superior effort for three more seasons but, after the 1982 season, he retired. During those three years, he couldn't drive off his foot from his left to right and opponents were getting outside of him, trapping him in the blocking wash.

"The films don't lie," Jack said. "There has been a drop-off. It hasn't been getting any better or worse, so I decided it was time to quit."

"The fact is that Jack Ham, circa 1972-1979, was a Mona Lisa," Pittsburgh columnist Phil Musick wrote. "The Ham of the past three seasons was by comparison a finger-painting."

Those last three injury-plagued seasons did little to dim the Jack Ham reputation, however. To the millions who saw him play, to his teammates and opponents, he will go down in history as the sensational Steeler who created a new standard for outside linebackers in modern-day pro football.