Hall of Famers Published on : 1/1/2005
Known as the 'Great Ham,' Jack Ham was an integral part of the 'Steel Curtain'


Near the end of Jack Ham's 12-year career as a sterling outside linebacker for the Pittsburgh Steelers, a celebrity roast was staged in his honor to aid a charity cause. The Steelers' coach, Chuck Noll, was asked to speak.

"How do you roast someone who is perfect?" was Noll's only response. 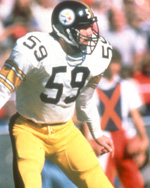 While it could be argued that no one is perfect, it is also true that few have ever played Ham's position in pro football as well as he did during the finest years in Pittsburgh's gridiron history.

Perpetual recognition of Jack's outstanding performances was assured with his election to the Pro Football Hall of Fame in 1988. That ultimate honor was accorded Ham in his first year of eligibility following the mandatory five-year retirement period.

Ham, one of several superstars who paced the Steelers in the 1970s, earned the reputation of being a big-play defender who was at his absolute best in the biggest games. In 1974, he had two interceptions in Pittsburgh's 24-13 AFC championship win over Oakland that put the Steelers into the Super Bowl for the first time. In three 1978 playoff games, he had 18 unassisted tackles. Against Houston that year, he recovered two fumbles and intercepted a pass in a 34-5 rout of the Oilers.

Jack had one of his finest games in his second campaign in 1972 when he led the Steelers to a 16-7 victory over the Kansas City Chiefs. He made seven unassisted tackles - three of them behind the line of scrimmage in one-on-one situations - assisted on three other tackles, had a crucial pass deflection and recovered two fumbles. He was named the NFL Defensive Player of the Week.

Typical of his play that day was his reaction to a Len Dawson-to-Jim Otis screen pass that he stopped for a one-yard loss. "They completely fooled me," teammate Joe Greene admitted. "But Jack understood exactly what was going on and went through a mess of blockers to make the play."

It was this ability to diagnose and abort enemy plays that attracted Noll to Ham at the time he selected him in the second round of 1971 draft. At 220 pounds, the Penn State All-America was much smaller than the prototype pro linebacker of the early 1970s. But Noll liked his speed and quickness and particularly his reputation as an intelligent defender who could anticipate every opposing move and react accordingly. 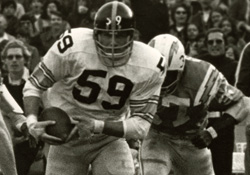 Pittsburgh's defense was the most feared in the NFL through most of the 1970s but, when Ham joined the team, Noll was still building his juggernaut. He had Greene on hand for the left defensive tackle spot and L.C. Greenwood next to him at left end. Noll correctly sensed that Ham, with his speed and agility, could effectively thwart any running back who got through the front four and, at the same time, become almost a fifth member of the secondary.

While some linebackers might not like the idea of being isolated on a swift secondary receiver streaking out of the backfield, Ham welcomed the challenge.

"I love playing pass coverage," he explained. "Some people think of a linebacker only as a guy who can get to the right hole in a hurry and hit hard. To me, that's less than half of being a linebacker. You've got to do your job on pass coverage, or else you're a liability."

In the 1971 pre-season. Ham intercepted three passes in the final game against the New York Giants and earned a starting job, one that he kept throughout his career. Early in the regular season in a 21-17 win over the San Diego Chargers, Jack gave notice of things to come when he intercepted John Hadl's pass at the Steelers 17 early in the fourth quarter. On the last play of the game, he deflected what might have been Hadl's game-winning two-yard pass to Gary Garrison.

One of the craziest plays in National Football League history took place in a divisional playoff game.