In 1994, the National Football League instituted the use of a radio helmet to allow for limited communication from the sidelines to the quarterback on the field. While it would seem that such a technological advancement was a first, the idea was nearly forty years old! 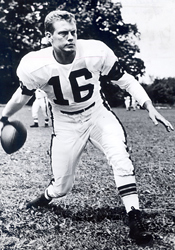 In 1956, two Ohio inventors, John Campbell and George Sarles, approached Hall of Fame coach Paul Brown of the Cleveland Browns with a radio receiver they had developed. The two theorized that the radio could be placed in a helmet to help Brown communicate with his players on the field. In doing so, Brown would eliminate the delays caused by his utilization of substitute players who ran the plays from the sideline to the huddle.

Brown liked the idea and agreed to put the radio receiver into quarterback George Ratterman’s helmet but insisted that the plan be kept a secret and thoroughly tested before ever being used in an actual game. The radio was carefully mounted into the helmet and, using the seclusion of a wooded area behind Campbell's home, the pair proceeded to test the unit. Sarles retreated to the woods with the helmet. The signal became weak and communication broke off. When Sarles did not return, Campbell set out to find his partner. Soon thereafter, he spotted Sarles talking with a police officer who had intercepted the signal. Fortunate for Sarles and Campbell, the officer was a Browns fan and agreed to keep the discovery under wraps. Nonetheless, the pair changed the frequency on the unit. 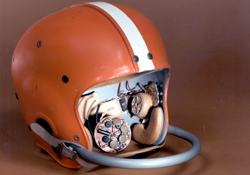 The helmet was first used, to perfection, in an exhibition game against the Detroit Lions. However, the Lions coaching staff began to notice that Brown was not using his usual substitutions for play calling. Shortly after halftime, one of the Lions’ assistants spotted the hidden transmitter that set behind a wooden light post on the sideline.

News quickly spread throughout the league and other teams scrambled to devise their own units, none of which proved as effective as the Sarles-Campbell invention. The Browns used the helmet in three more games before NFL Commissioner Bert Bell outlawed the use of the device.

In 1985, John Campbell donated the headgear to the Pro Football Hall of Fame. Ratterman’s helmet is now on display in our Gridiron Glory traveling exhibit with other recent innovations, including a modern day radio helmet.