First of all, it was pretty unbelievable for me at that time that I was in such a position because it's something that I never seeked. And, to be there was quite amazing but I have to admit it was quite exciting.

Unfortunately, things didn't work out contract-wise with the Steelers and so it made it a mute point.

Well, my feeling was that there could not have been a better person to do it.

What Walter accomplished with a Bears team that struggled for so many years is quite amazing. Just his ability and drive, and also missing so few games. 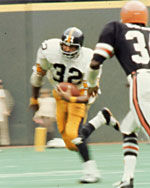 As a person and a football player - I felt that if anyone should break it and deserved to break it, it was Walter Payton. I was very happy for him and very proud of him.

Qualities of a Great Back

Everybody has there own style and circumstances have a lot to do with it - what team you're on and do they feature a running back.

To say there is one thing or the same thing that makes everybody click and go, it's just not that way.

Does your style of running really fit (your team's) game strategy. Does it really fit with what they're trying to accomplish. Then, do you get the carries to make it happen. And, then are you lucky enough to really stay healthy.

With what he's accomplished is quite amazing when you think about what people were saying in the beginning of being too small and being too slow.

What it really shows you, with determination, and durability, and the love of the game. . .what that can do.

I take my hat off to him. Because sometimes people say there's records that will never be broken. And, before you know, along comes someone who does it. And, sometimes who you might least expect. To me, that shows me a lot of greatness.