I think the thing that was unique about Walter Payton was that, even in his last season, he may have been the best conditioned athlete on the field. And, his running style was one of attacking the tackler. He never shied away from a collision. It was absolutely amazing to me that his body held together as long as it did.

He had incredible leg power and incredible drive for a man his size as well as wonderful balance and quickness. So, if you didn't put a solid hit on him and then hang on and wrap him up, you didn't get him to the ground.

Brown was such a marvelous combination of speed and balance and power, and a bigger man than was Walter. But, at the same time, his running style was not an attack style like Walter's was. He really ran for open areas, and then if he got in trouble, if he needed his power, then he would use it. Walter was always willing to dive right into the middle of the action.

Emmitt, in some ways, does remind you of Walter in the fact that he's never been one who would duck the collisions either. I don't think he has quite as much power as Walter did. But, at the same time, I think he may be a little quicker afoot. The lateral movement, especially in his early days, was marvelous for him. He made a lot of yardage just being able to dance a little bit to the left or a little to the right, keeping those shoulders square and then using that burst of speed to pick up the yardage.

Longevity in the NFL 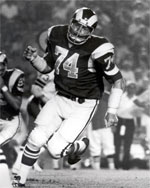 When you begin to talk longevity in a sport as violent and as physical as professional football, you have to have some luck involved. The wrong kind of hit can end your career at any time.

The part that is most difficult, though, is maintaining that competitive edge.

It's of being able to generate the kind of enthusiasm that you have to have in practice for example.

Emmitt is probably working harder to stay in shape today than he did in his first few years because he has to keep that physical edge to be able to pursue this record.

The mental side of it is maybe even more important in the later years because, it's so easy to put it on automatic pilot. And, if you do that, there's no way you're going to break those records.