I know the great respect we had for Walter. Years later, I got to know him fairly well because I lived in Chicago and I learned what a great person he was as well.

He was the complete back because of his ability to run with the ball, to receive, to block, and to play unselfishly. And, I see tremendous parallels to Emmitt Smith. 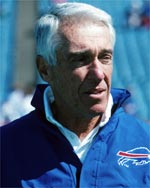 On Planning for Emmitt

We faced (the Cowboys) in two Super Bowls in addition to a couple of other games. And, when you face a team that is so good and so well balanced, it's almost a mistake to stretch the point and say, 'this is how we stop that guy.' Because, if you do, you're going to get burned badly in other ways.

We didn't come up with beautiful schemes to try and prepare for him. We would try to point out what a great player he was, how we had to hustle, how we had to gang tackle, how we had to put him on the ground. But, to say a special game plan, people really are romancing when they talk about specially game planning for an individual.

Qualities of Great Running Back

You have to be a very durable person. Emmitt has a position that is probably the most vulnerable to being beaten up.

The great qualities of most of the outstanding running backs have had is balance.

The great backs have great intuition. They have a love for the game, they couldn't play it that long unless they truly loved the game.

Of course, I'd mention Walter Payton, without question.

I coached one of the great runners in the game, I feel, in Thurman Thomas.

I'm old enough to go back and remember people like George McAfee and Gale Sayers. Gale Sayers was a magnificent player.

There was a player with the Dallas Cowboys whose career was cut short. He was their first great running back. He was a tremendous football player but doesn't get a lot renown now because he only played five or six years, by the name of Don Perkins.