Coverage of His Pursuit of Steve Van Buren

Not as much as there is these days. The backs and the backfield has changed a lot since my era. When I was playing, we had three backs carrying the ball, and you never carried the ball over 10-15 times a game.

I don't think the contact between teams and people was as great as it is today. All I'd knew was what I would hear over the wire. 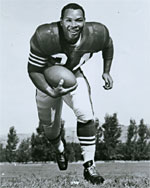 The Record Not Including AAFC Stats

That was a lot of hullabaloo. A record is a record. If you set a record, what are playing tiddlywinks or football? You know, the guys in the (AAFC) played football like the guys in the NFL. In fact, the same guys came over and played in the same leagues.

On This Record Being Broken

Records are made to be broken. That's why they keep track of records. You keep moving on, to another stage.

What Could He Have Done With 30 Carries a Game?

That one I can't answer, I'd be projecting. But, we had three guys that could carry the ball - myself, Hugh McElhenny, and John Henry Johnson (all in the Hall of Fame). So, you had to divide the ball, otherwise there would have been a big fight out on the field.

I know Emmitt is a great runner, and I would have him on our team.