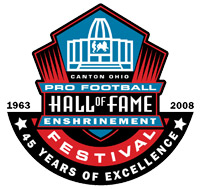 The six-man class was elected by the Pro Football Hall of Fame’s Selection Committee who met today in Phoenix, Arizona. The newest members of the Hall were selected from a list of 17 finalists that had been determined earlier by the committee.

Dean, a four-time Pro Bowl selection, was one of the league’s most feared pass rushers during his 11-season career with the San Diego Chargers and San Francisco 49ers.

Green was known for his great speed during his 20 seasons with the Washington Redskins from 1983-2002. He intercepted a pass in 19 straight seasons and was named to the NFL’s All-Decade Team of the 1990s.

Thomas, an undrafted free agent, became one of the finest cornerbacks of his era. He ranks fourth all-time in interceptions by a cornerback with 58 picks during his career with the Kansas City Chiefs from 1966-1978.

Tippett starred at linebacker for 11 playing seasons for the New England Patriots and amassed 100 career sacks. A member of the NFL’s All-Decade Team of the 1980s, he earned five straight Pro Bowl berths.

Zimmerman earned the rare distinction of being named to two NFL All-Decade Teams (1980s and 1990s). A strong and versatile tackle who split his career with Minnesota and Denver, he was elected to seven Pro Bowls.

The 2008 class will increase to 247 the number of all-time greats permanently honored in the Pro Football Hall of Fame. The Enshrinement of the Class of 2008 will take place at the Pro Football Hall of Fame in Canton, on Saturday, August 2, 2008 at 6:00 p.m. ET. The Enshrinement Ceremony will be televised live by both ESPN and the NFL Network. The annual NFL Hall of Fame Game will be played on Sunday, August 3, 2008 at 8:00 p.m. and broadcast live by NBC. Teams have not yet been announced.

John Lewis from Somerset, Massachusetts, was the lucky winner of the Predict the Class of 2008 Contest presented by Samsung.