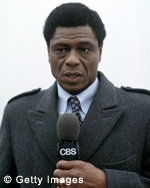 Cross was an NFL analyst and commentator for CBS Sports from 1971, when he became the first African American sports analyst on national television, to 1994, including anchoring the Emmy-Award-winning The NFL Today from its inception in 1975 through 1989. Besides football, Irv covered a variety of sports for CBS, including track and field, gymnastics and the NBA.

A native of Hammond, Indiana, Cross was drafted by the Philadelphia Eagles in the seventh round of the 1961 NFL Draft. Always a student of the game, Cross earned a starter’s berth midway through his rookie season. The following year he recorded a career-high five interceptions. In 1966, following two Pro Bowl seasons with the Eagles, he was traded to the Los Angeles Rams. Then in 1969, he returned to the Eagles and became a player/coach. He retired as a player in 1970 and became an assistant coach for the Eagles.

"I always enjoyed thinking about football, thinking about strategies, coming up with ways to break offenses and design defensive concepts," Cross recalled about his career in the NFL. "That's always been a real exciting thing for me to do. So with that job, I was able to do that as well as do contracts with some of the guys who were lower-round draft choices.

"My hope one day was to be a general manager some place in the league. That never developed."

What did develop was a 23-year career with CBS Sports as an NFL studio and game analyst.

“I’m old fashion,” Cross remarked. “The game means a great deal to me and I have a high regard for the people who made pro football what it is today… I believe we should treasure, protect and preserve all that we can of the greatest sport in the world. I am humbled to have been selected as one of those in the radio-TV business to have had an impact on the game.”

Today, Cross serves as the Executive Director, Big Brothers Big Sisters of Central Minnesota and continues to do football commentary for Twin Cities Fox Broadcasting affiliate Fox 9. Previously he served as the Special Assistant to the President of Macalester College for Development and Director of Athletics and Physical Education, and as Athletic Director at Idaho State University.

Cross will receive the Pete Rozelle Radio-Television Award on Friday, August 7 during the Enshrinees Dinner. That event is where the Class of 2009 enshrinees – Bob Hayes, Randall McDaniel, Bruce Smith, Derrick Thomas, Ralph Wilson, Jr., and Rod Woodson – will receive their gold Hall of Fame jackets from each of their presenters.

The Class of 2009 Enshrinement Ceremony takes place the following day at 7:00 PM ET. On Sunday, August 9, at 8:00 PM ET, the Buffalo Bills and Tennessee Titans will play in the annual Pro Football Hall of Fame Game. Tickets still available>>> | Fan and travel packages>>>

This is the helmet worn by Class of 2009 enshrinee Randall McDaniel.