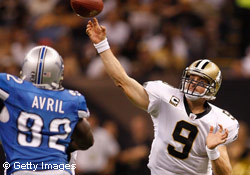 On September 28, 1969 the Minnesota Vikings Joe Kapp became the fifth quarterback to throw for seven touchdowns in a game. No National Football League passer has matched that output since but 16 others have thrown 6 TDs in a game including Peyton Manning who did it twice. (QBs with 7 TDs in a game)

On Sunday New Orleans Saints quarterback Drew Brees added his name to the list when he completed 26 of 34 passes for 358 yards, and 6 TDs in the Saints 45-27 win over the Detroit Lions. It marked the first time in NFL history that a quarterback threw six touchdowns on Kickoff Weekend.

Brees is the second Saints quarterback to throw a half dozen TD passes in the same game. Billy Kilmer threw 6 TDs in a game against the St. Louis Cardinals on Nov. 2, 1969. Amazingly, his counterpart Charley Johnson also threw 6 touchdowns for the Cardinals. From the Hall of Fame’s Archives. Newspaper article of Nov. 2, 1969 game when Kilmer and Johnson combined for an NFL record 12 TD throws in the same game (PDF)>>>

The debut of rookie QB Mark Sanchez with the New York Jets conjures up memories of some Hall of Fame quarterbacks.

Each Monday throughout the 2009 NFL season, we profile a different member of the Pro Football Hall of Fame. Today, we remember the legendary career of Jackie Slater. A third-round pick in the 1976 NFL Draft, he established himself not only as one of the greatest offensive tackles of all-time but one of the best players at any positition.