Pro Football Hall of Fame Coach and legendary broadcaster John Madden has been appointed “Special Advisor to the Commissioner,” the NFL announced today.

“John Madden still has tremendous passion for the game and offered to continue to play a constructive role for the league,” Goodell said.  “It was an offer we couldn’t refuse.  His experience, deep knowledge and unique perspective will be a major asset to our game.” 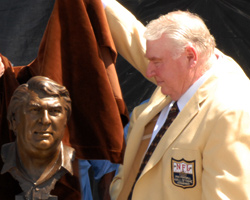 “Throughout my life, I have always had a football season,” Madden said.  “As a player, as a coach, and as a broadcaster.  When I retired from broadcasting, I didn’t retire from my passion and interest in the game.  This position enables me to continue that.”

Madden will participate in meetings of the General Managers Advisory Committee and take part in a weekly call with Commissioner Goodell or his designee to discuss issues from the previous week’s games.  Madden will be available as needed for additional consultation.

Madden served as head coach of the Oakland Raiders from 1969-78, leading the club to a 112-39-7 record and a win in Super Bowl XI.  Following his coaching career, Madden turned to television, where for the next 30 years he won 16 Emmys and became one of the most acclaimed sports broadcasters in history, calling NFL games for ABC, CBS, FOX and NBC before retiring on April 16, 2009.

The new 80,000-seat Cowboys Stadium is the newest facility in the NFL. Take a look at the new home of the Dallas Cowboys and see your favorite stadium!

Throwback Game of the Week - Chicago at Green Bay

No rivalry in National Football League history is deeper than the Bears and Packers who meet to kickoff the 2009 season in Lambeau Field on Sunday night.