Super Bowl Memories: The Haves and the Have Nots clash in Super Bowl XLIII

Any fan walking through the new Lamar Hunt Super Bowl Gallery at the Pro Football Hall of Fame has to be filled with renewed hope. There are multiple reminders, including the incredible new film in The Super Bowl Theater, of last year’s game featuring a most improbable matchup.

At the onset of the 2008 National Football League season few would have predicted that the Arizona Cardinals would be facing the Pittsburgh Steelers to fight for the Vince Lombardi Trophy. Now, with one week in the books this year, all 32 NFL clubs are vying for a spot in Super Bowl XLIV in February.

Like the remarkable playoff run by the Cardinals last season, it’s anyone’s guess as to who the Cinderella story might be this year. 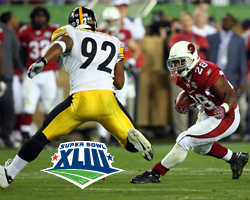 Super Bowl XLIII was a matchup of the “haves” and “have nots.”  The Steelers had won five Super Bowls coming into the game and were looking for its record sixth world’s championship. The Cardinals, on the other hand, had never advanced to a Super Bowl.

The Steelers jumped out to an early ten-point lead on a Jeff Reed field goal and a one-yard Gary Russell TD run.  After Arizona cut the lead to three with a one yard pass from Kurt Warner to Ben Patrick, the fireworks began.  With 2:00 minutes left in the half the Cardinals marched their way down the field on the league’s number one defense looking to take a 14-10 lead into the locker room.  But as Warner took a three step drop to throw a slant to Anquan Boldin, James Harrison, the 2008 NFL Defensive Player of the Year, stepped in front of the pass and rumbled his way 100 yards for a pick six.

Coming out of halftime trailing 17-7 the Cardinals could have packed it in and not responded to adversity. But that’s not the type of character the Cards exemplified through its run to the Super Bowl.  Following another Jeff Reed field goal the Cardinals fought their way back with a safety and two Larry Fitzgerald touchdown receptions. Fitzgerald’s second touchdown was a 64-yard catch and run that put Arizona up 23-20 with 2:37 left in the game, setting the stage for one of the most memorable finishes in Super Bowl history.

In the final two minutes of Super Bowl XLIII “Big” Ben Roethlisberger and Santonio Holmes played pitch and catch all the way down to the Arizona six-yard-line.  With 42 seconds remaining and the weight of Pittsburgh’s sixth Super Bowl Championship on their shoulders, Roethlisberger and Holmes hooked up one more time for miraculous touchdown pass and catch, solidifying their place in Super Bowl history.

Modern-Era nominees for the Class of 2010

Jerry Rice and Emmitt Smith headline a list of 131 modern-era preliminary nominees for the Pro Football Hall of Fame’s Class of 2010.

Thank You For Voting!

Thank you for all of the fans who’ve participated in our contest! The voting period has ended. We will post the winner after we audit the voting totals. Check back later this week to read about our winner!