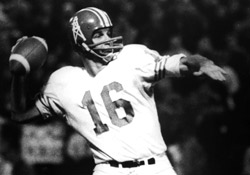 The American Football League changed a great deal from its beginning in 1960 compared to what it looked like in its final season of 1969. Once viewed as a minor league football sideshow, the AFL matured into to a legitimate power that successfully battled pro football’s old guard, the National Football League.

A small group of 19 players, affectionately known as “The Originals,” were there every step of the way to experience the league’s growth first-hand. These 19 players are the only men to have played in all ten seasons of the AFL. Each member of this small fraternity experienced all the growing pains and the highs and lows the league endured. These men were a small fraction of the approximate 1,500 players that inhabited the rosters of the AFL’s 616 total games.

Gino Cappelletti
Wide Receiver/Kicker – 1960-69 Boston Patriots
An underrated receiver, Cappelletti led the AFL in scoring five times and was the only player in league history to top the 1,000-point plateau.

Larry Grantham
Linebacker – 1960-69 – New York Titans/Jets
Signed with the AFL because he was deemed to small (6-0, 210 lbs) to play in the NFL. His spirited play proved otherwise as he earned five AFL All-Star Game selections.

Wayne Hawkins
Guard – 1960-69 Oakland Raiders
Initially viewed to be too small (6-0, 240 lbs) to play guard, his determined play earned the respect of teammates and opponents alike.

Jim Hunt
Defensive Tackle – 1960-69 Boston Patriots
A stout defender at 5-11 and 255 pounds. He was known as one of the AFL’s most feared pass rushers. He once had a 78-yard interception return for a TD.

Harry Jacobs
Linebacker – 1960-62 Boston Patriots, 1963-69 Buffalo Bills
Was a taxi-squad player for the Detroit Lions and St. Louis Cardinals in the NFL before joining the AFL. Jacobs was the defensive signal-caller for both the Pats and the Bills.

Jack Kemp
Quarterback – 1960-62 Los Angeles/San Diego Chargers, 1962-69 Buffalo Bills
This future congressman was one of the early stars of the American Football League. Kemp guided the Bills to two AFL championships and was the league’s Most Valuable Player in 1965.

Paul Lowe
Running Back – 1960-69 Los Angeles/San Diego Chargers
Lowe had been cut by the San Francisco 49ers when he arrived in the AFL in 1960. He quickly became one of the most dominant runners in the league and led all AFL rushers in 1965.

Jacky Lee
Quarterback – 1960-63, 1966-67 Houston Oilers, 1964-65 Denver Broncos, 1967-69 Kansas City Chiefs
Lee saw very little playing time due to the fact that he usually had an all-star quarterback in front of him. His claim to fame is that he was involved in a unique trade in which Houston allowed Denver to borrow him for two years.

Bill Mathis
Running Back – 1960-69 New York Titans/Jets
Mathis was a reliable workhorse running back who was noted for his blocking and pass protection. His best year occurred in 1965 when he logged 604 yards rushing and 242 receiving yards.

Paul Maguire
Punter/Linebacker – 1960-63 Los Angeles/San Diego Chargers, 1964-69 Buffalo Bills
Maguire was a rugged linebacker who earned most of his distinction as a booming punter. No punter lasted as long as he did in the AFL.

Don Maynard
Wide Receiver – 1960-69 New York Titans/Jets
One of the most feared pass catchers in the AFL. His receiving yardage total of 10,289 was more than 1,300 yards better than any other receiver.

Ron Mix
Tackle – 1960-69 Los Angeles/San Diego Chargers
Mix was a number one draft choice in the NFL but decided to play for the Chargers. He stepped right into the tackle role and immediately earned multiple All-AFL honors.

Jim Otto
Center – 1960-69 Oakland Raiders
The premier center of the AFL, Otto played in all 140 of his regular season games. He also played in two AFL championship games, one Super Bowl and nine AFL-All Star Games.

Babe Parilli
Quarterback – 1960 Oakland Raiders, 1961-67 Boston Patriots, 1968-69 New York Jets
Parilli joined the AFL after a short stint in the Canadian Football League. His best year came with the Patriots when he led the league in passing in 1964.

Johnny Robinson
Safety – 1960-69 Dallas Texans/Kansas City Chiefs
Robinson gained more than 1,800 rushing/receiving yards in his first two years in the league before focusing solely on the defensive side of the ball. He was a first- or second-team All-AFL safety seven times.

Paul Rochester
Defensive Tackle – 1960-63 Dallas Texans/Kansas City Chiefs, 1963-69 New York Jets
Joined the Texans after he received his walking papers from the cross-town rival Cowboys. He went on to have a steady career and played a strong role on two AFL championship teams.

Ernie Wright
Tackle – 1960-67 Los Angeles/San Diego Chargers, 1968-69 Cincinnati Bengals
Wright was a prototype offensive tackle at 6-4, 270 pounds. He was one of the youngest players in the AFL as a 20-year-old rookie and remained in league as a savvy veteran with the expansion Bengals.

Road to Canton (via South Florida)

Part 7 of our series on the nominees for our Class of 2010. This week, we profile the 13 linebackers who are on the list of preliminary nominees. The Pro Football Hall of Fame’s Board of Selectors reduction to 25 semifinalists takes place on Thanksgiving Weekend.

Hall of Famer Jim Taylor was the Packers’ all-time leading rusher, a title he held for more than four decades until Ahman Green surpassed him Sunday. Here’s a look at the career of one of the game’s greatest runners, Class of 1976 enshrinee Jim Taylor.