The pages of American history have not been written without some discriminations and discourtesies. Since its origin, professional football has mirrored American culture. In many ways the positive values of the sport have helped society move forward and bring about change.

Arguably, no decade was more tumultuous for the United States than the 1960s. During those years African Americans struggled for the same rights and freedoms which other men and women enjoyed. Especially in the southern states where segregation was still a terrible problem even after the Civil Rights Act of 1964 was signed that gave the federal government the right to enforce desegregation.

This scene was evident as the American Football League scheduled its annual All-Star game for Saturday, January 16, 1965, to be played at Tulane Stadium in New Orleans, Louisiana. This contest came just ten days after the city had hosted the first completely integrated Sugar Bowl game without incident. Syracuse, whose roster included eight African American players, lost to Louisiana State 13-0 in that game.

This seemed to bode well for the city. New Orleans had been vocal about its attempt to attract a professional football franchise whether in the AFL or the National Football League.  Those aspirations received a major setback in the days to come as the AFL All-Stars began to arrive at the airport.

The AFL players were assured by Dave Dixon, head of the group sponsoring and promoting the game that the city was safe and there would be no problems. Running Back Clem Daniels of the Oakland Raiders explained, “they told us (to) bring your wife and kids. There will also be a golf tournament. It sounded like a big picnic.”

{GALLERY}It eventually turned into a nightmare as many of the black players were left stranded at the airport for hours when they arrived in town. Once in the city African American players were refused cab service and in some cases those who were given rides were dropped off miles from their destinations.

Other players were refused admittance to nightspots and restaurants, while nearly all were subjected to tongue-lashings and to a hostile atmosphere on Bourbon Street in the French Quarter while sightseeing.  The situation became so uncomfortable for the black players who clearly felt unwelcome that most simply returned to their hotels.

Later, all 21 African American players who were scheduled to suit up met at the Roosevelt Hotel, the headquarters for the East team. The group discussed in great detail the treatment they had received and with a vote decided to walk out on the All-Star game.

“The majority ruled. We felt we couldn’t perform 100% under the current circumstances,” said Buffalo Bills end Ernie Warlick. “Actually this came as a complete surprise to us.  We were led to believe that we could relax and enjoy ourselves in New Orleans just like other citizens.”

Some players were more vocal than others about the adverse conditions and discriminatory practices experienced in New Orleans. But, in the end Warlick and other black All-Stars, came together. Finding the situation unacceptable, the players decided that they would not play in the All-Star as long as it was to be hosted in New Orleans.

As the black athletes made it clear that they were heading home, league officials and the game organizers had a decision to make. Would the game go on without the nearly two dozen players who walked out? That question was soon answered when, in a show of support and sympathy for their cause, white players such as Hall of Fame Tackle Ron Mix of the San Diego Chargers decided a statement was needed.

“I made a decision then that if the game were to go on despite the absence of the black players, I would not play,” reflected Mix. “I felt I would be wrong in not playing but that it was important for at least one white player to join them, to say we’re with you.” 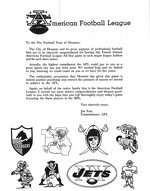 Mix was not the only white player to join the boycott. The next day, on Monday, Jan. 11, AFL commissioner Joe Foss announced that the game would be moved to Houston and played at Jeppesen Stadium.

LETTER FROM FOSS. See the letter from AFL Commissioner Joe Foss that appeared in the game program for the AFL All-Star Game. Click on thumbnail (right) to enlarge image.>>>

"Dixon assured me that New Orleans was ready in all aspects for a game between racially mixed teams. Evidently, it isn't." Foss remarked at the time. "They contacted as many businessmen as possible and got them to agree to treat the Negro players well. But they just couldn't get to everyone. Negro players run into problems in nearly every city. But I guess what went on in New Orleans was more than they could be expected to take. I can't say that I blame them."

After much publicity, the game itself was anticlimactic.  The West won, 38-14, led by the game’s Most Valuable Player Keith Lincoln of the Chargers. The San Diego running back caught a 73-yard touchdown pass from Kansas City’s Len Dawson and scored his second touchdown on an 80-yard run.

The stand the AFL and its players took against the city of New Orleans was unprecedented. It ultimately brought about change that was necessary in order for the city to get a NFL franchise. That came to fruition two years later when the league granted New Orleans a team.

The boycott was clearly a milestone event that went beyond the world of sports and was more a reflection of American society at the time. It helped shine a spotlight on Congress’s ability to enforce the Civil Rights Act of 1964 and proved that if America was to desegregate, the culture needed to change its mindset and adopt a more progressive view of the human race as quickly as possible.

African-Americans in the 1965 AFL All-Star Game

*Selected to the game but did not play.

Kendle is a researcher at the Pro Football Hall of Fame. He joined the Hall of Fame's staff in 2006.

Running back LaDainian Tomlinson is the highest ranked rusher among those players active in 2009. He added 730 yards to his career rushing total to jump from 14th place all-time at the start of the season to 8th place by season's end.