Hall Info Published on : 9/10/2010
U.S. Senator Mitch McConnell made a visit to the Pro Football Hall of Fame on Thursday afternoon. The Senate Republican Leader, an avid football fan, toured the museum before attending a fundraiser at nearby Walsh University.

McConnell is the longest-serving U.S. Senator in Kentucky’s history. Four members of the Pro Football Hall of Fame have ties to the Bluegrass State. Halfbacks Paul Hornung (Louisville) and George McAfee (Corbin) were born in Kentucky while quarterbacks Johnny Unitas and George Blanda played their college football at McConnell’s alma maters – University of Louisville and the University of Kentucky respectively. 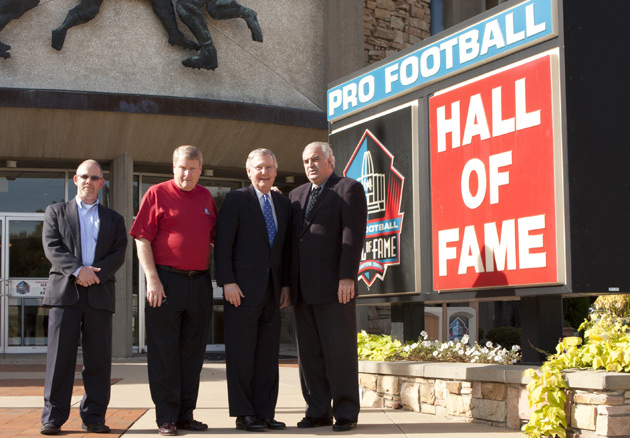 Above: Senator McConnell (second from right) posed for a photograph on the front steps of the Hall of Fame with Hall of Fame staff -- (L-R): Pete Fierle, manager-digital media/communications; Bill Allen, CFO; and Dave Motts,Vice President - Marketing/Operations.

Below: Senator McConnell began his tour by learning why the Hall of Fame is located in Canton. 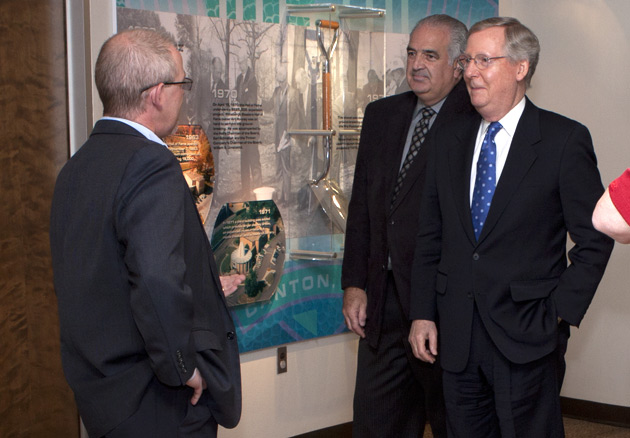 Among all the excitement of Kickoff Weekend, the Giants and Jets open the New Meadowlands Stadium while the Chiefs will show off the renovated Arrowhead Stadium. Here’s a look at all of the stadiums that these three stories franchises have called home over the years.