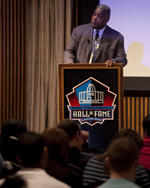 His message to the middle school and high school students was simple and direct. He conveyed that education is the key to their future and also stressed that students must have respect for themselves and others around them. Nearly 800 students and teachers from schools across Northeast Ohio and Indiana attended the seminar at the Hall of Fame and attentively listened as Shell spoke. An additional 1,500 students tuned in from across the United States via the Hall of Fame's videoconferencing technology. In all, students from 31 schools representing 16 states.

The Miami Dolphins also participated in the program. The Dolphins made the videoconference connections possible for three schools in the Miami-Dade County Public School District. One of the schools, Caribbean Elementary, was joined by former Dolphins' linebacker Twan Russell who watched the videoconference broadcast with the students.

Here is a complete list of participating schools both live and through videoconference:

Ollie Matson was traded in 1959 by the Chicago Cardinals to the Los Angeles Rams in exchange for nine players.