A major part of the Pro Football Hall of Fame’s mission is to “preserve professional football’s historic documents and artifacts.” Many times, it doesn’t take long for a young player’s memorabilia to be called an artifact.

Such is the case with the St. Louis Rams rookie quarterback Sam Bradford. His record-setting performance in 2010 is now a part of the Hall of Fame’s vast collection. On Friday, his jersey from the regular season finale against the Seattle Seahawks arrived in Canton.

The game capped a remarkable year by the first player selected in last April’s draft. Bradford became the only rookie quarterback picked No. 1 overall in the draft to win four of his first five starts at home since the common draft began in 1967.

It all began when he made his NFL debut by throwing 55 passes to set the NFL record for most attempts by a rookie in Kickoff Weekend. More history-making games followed for Bradford as he helped the Rams turnaround from a 1-15 finish in 2009 to post a 7-9 mark this past season. In Week 12, Bradford became the first rookie passer to throw for 300 yards, fire three TDs while not being intercepted in a road win. The Rams downed the Broncos in Denver, 36-33, that day.

Also, along the way, Bradford had the longest streak of passes without an interception by a rookie (169). 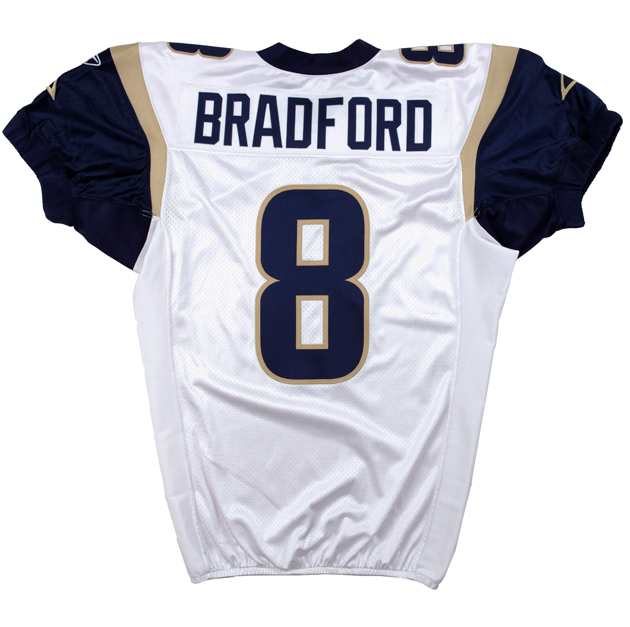 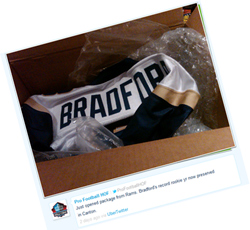 Are you a follower?


Followers of the Pro Football Hall of Fame on Twitter were the first to see Bradford’s jersey. We tweeted a photo last Friday just seconds after our curator opened the package shipped by the Rams.

You can also find us on Flickr and FourSquare.