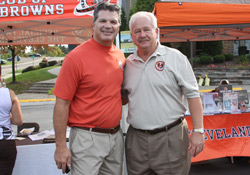 The Inaugural Browns Bye Week Bash was held at the Pro Football Hall of Fame on Sunday, October 9. The Hall's lower parking lot was transformed into a Browns tailgate party featuring food from Jerzee's All American Sports Grille, Barley House of Akron, and seasonal beers from Anheuser-Busch.

The Cleveland Browns were on hand to give away prizes and let fans show off their arms with their quarterback toss inflatable and bean bag toss games. Browns highlights and music from 97.5 WONE kept fans in the tailgating spirit throughout the afternoon.

Fans gathered around the 97.5 WONE tent to win prizes from a trivia contest. Lucky winners walked away with autographed merchandise from Joe Haden and Mohamed Massaquoi, t-shirts from Bud Light, gift cards to Jerzee's and sweatshirts from Barley House. The best dressed Browns fan won a $100 gift card the Hall of Fame Store.

In all, nearly 200 Browns fans enjoyed their team's bye week and took advantage of the special $10 admission to the Hall. While inside, fans met and received autographs from Browns alumni Don Cockroft and Frank Stams. Many fans also enjoyed presentations of rarely seen Browns artifacts pulled from the Hall's collection.

Deion Sanders helmet from when he played with the Atlanta Falcons.

Aaron Rodgers became the fifth player since 1970 to record a 100+ passer rating in each of his team's first five games of a season.