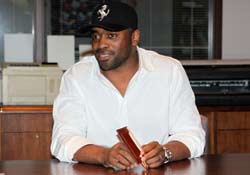 Class of 2012 enshrinee Curtis Martin traveled to Canton on Monday to tour the Pro Football Hall of Fame and meet with staff in preparation for his enshrinement in August. The former star running back was particularly enamored with the Hall of Fame Gallery, home to the iconic bronze busts.

He is the final member of the newly elected class to visit the Hall of Fame to make plans for the 2012 Enshrinement Festival. Martin, along Jack Butler, Dermontti Dawson, Chris Doleman, Cortez Kennedy, and Willie Roaf, will be formally inducted into the Hall of Fame on Saturday, Aug. 4.

VIDEO: Martin took a few moments to talk about his career and upcoming enshrinement. WATCH>>>

Class of 2012 enshrinee Cortez Kennedy recently donated several mementos from his career with the Seattle Seahawks to the Hall of Fame.

Hall of Fame tackle Art Shell was the center of attention in his hometown on Friday as he was honored as part of the Pro Football Hall of Fame and Allstate Insurance Company’s Hometown Hall of Famers™ program.