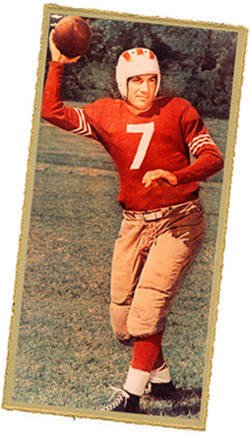 He helped lead the Brooklyn Dodgers of the National Football League to success during his six seasons with the franchise (the team merged with the Boston Yanks in 1945). A versatile player, who passed, ran, punted, kicked and caught the football while also playing on defense, was named the league’s Most Valuable Player in 1940. His service in World War II interrupted his pro football career but he returned for two final seasons. The last season of his Hall of Fame career was marked by him leading the New York Yankees to a division title in the rival All-America Football Conference.

Parker was enshrined into the Pro Football Hall of Fame in 1972.

Ace Parker is the first member of the Pro Football Hall of Fame to reach 100 years old. Of the 273 inductees, there are 12 who have reached 90 years of age or older.

Ace Parker was a noted two-sport star in the late 1930s. He was picked in the NFL’s second ever draft when the Brooklyn Dodgers selected him in the second round of the 1937 NFL Draft.  He, however, didn’t join the club until after the baseball season. Headline news on Nov. 2, 1937 reported that the Duke All-American had signed with the Dodgers to play the remainder of the schedule. The Philadelphia Athletics of baseball’s American League, managed by the famous Connie Mack, owned Parker’s rights but gave their consent to his football contract.

The Brooklyn management wired a message to Parker that they would send a plane to Norfolk, Va., where he lived, that night. Parker was on the practice field the next day and few days later he lined up over center as quarterback of the Dodgers in a game against the Philadelphia Eagles. Although Brooklyn fell 14-10, Parker’s athletic talent was showcased. He threw for 122 yards and also provided several booming punts to help Brooklyn’s field position throughout the day.

Parker wasn’t signed in time for him to be listed in the game program for that game. But, he was splashed on the cover (see photo) of Brooklyn’s next home game that came three weeks later. Parker dazzled a crowd of 27,000 on Thanksgiving Day. His passing helped the Dodgers stun the heavily-favored New York Giants by playing them to a 13-13 tie. Parker led the Brooklyn attack from the very start and completed six of his first seven passes in the first half. He also contributed on the opposite side of ball when he picked off a Giants pass in the end zone in the second quarter.

Parker’s multi-dimensional abilities helped transform the Brooklyn Dodgers from cellar dwellers to challenging for a division title. Arguably his finest season came in 1940 when he guided the Dodgers to an 8-3-0 mark and just one game shy of winning the NFL’s Eastern Division.

He had many stellar performances during the ’40 campaign but none greater than his memorable day against the Cleveland Rams on Nov. 17, 1940. He led the Dodgers to a 29-14 win and was directly responsible for all his team’s scoring. Trailing 14-0, Parker got Brooklyn rolling when he stepped in front of a pass and ran his interception back 68 yards for a touchdown just before the first half ended. He then had to overcome two long TD passes that were negated due to penalty flags. He bounced back to toss a pair of scoring strikes later that put Brooklyn in front. His running set up a field goal on which he served as the holder. For good measure, he added another big interception which he ran back 38 yards to set up another touchdown. He also added a pair of extra points. Parker eventually left the game after he twisted his leg, the same one he had earlier injured in baseball.  He received a loud ovation as he limped to the sidelines.

Parker was received the Joe F. Carr Trophy as the league’s official Most Valuable Player that season as voted on by the Professional Football Writers’ Association. He outdistanced Sammy Baugh, Sid Luckman, and Don Hutson in the voting by the committee. He received 18 first-place votes and seven second -place votes to finish 56 points ahead of Baugh, the runner-up.

The award was in recognition of his versatility that was never more evident than that year. Although he did not win any one statistical category, he ranked among the best in nearly all categories. Ace threw 10 touchdown passes, rushed for 306 yards and 2 TDs; caught 3 passes including two for touchdown; kicked 19 extra points, averaged 38 yards on 49 punts, and intercepted six passes on defense. (Note: Parker was co-leader in interceptions that season but interceptions as an individual stat category wasn't included in the Official Record Manual until 1941).

Despite such a phenomenal season, Parker was nearly expelled from the league. League President Carl Storck insisted that Parker participate in the NFL’s All-Star Game in Los Angeles. Parker declared that he would not take part in the game as he was “through with football until next season” sharing that he was recovering from a separated shoulder and an ankle injury.  Despite threats of a suspension and fines, the league quickly advised the star QB that he was excused from the All-Star game.

After the season with much attention focused on whether Parker would commit to football or baseball, the Dodgers’ owner Dan Topping secured his brilliant player with what he described as “the highest two-year contract ever offered in football.”

Longevity was not one of Parker’s legacies on the football field. The start of his gridiron career was delayed due to him playing major league baseball. Then, he later lost out on three seasons when he served in the Navy during World War II.
His 68-game playing career is one of the shortest among any member of the Pro Football Hall of Fame. Nevertheless, Parker’s incredible talent was showcased enough during his seven seasons of pro football to earn him a bronze bust in Canton.

{GALLERY}Parker was the focus of attention during the Dodgers’ final home game in 1940. The team celebrated “Ace Parker Day” on Nov. 24, 1940 when they faced the Chicago Cardinals. Newspaper accounts stated that the game was likely the last time that Dodgers fans could enjoy seeing the remarkable exploits of Parker who they called the “One-Man Gang.” Reporters indicated that Parker would leave his pro football career behind and dedicate himself full-time to his major league baseball career.

Fittingly, Parker accounted for all of the Dodgers points in the 14-9 win over the Cards that kept their slim hopes of tying for a division title alive. He rallied the team from a 9-0 deficit in the third quarter by running 18 yards for the Dodgers’ first touchdown and then connected a few minutes later on a 25-yard pass play to Perry Scwartz. He added both extra points.

Despite the speculation, Parker returned to the Dodgers in 1941. His career was interrupted after that season when he served in World War II. He played two final seasons after the war with the NFL’s Boston Yanks in 1945 and in the rival All-America Football Conference with the 1946 New York Yankees.

Perhaps it is best that the photos of his ceremony are only available in black-and-white. Details of the day shared that the car given to Parker was pea green.

Ace Parker did it all as a player for the Brooklyn Dodgers. See this action from the 1941 season finale at the Polo Grounds in New York. He led the Dodgers to a 21-7 upset and season series sweep of their crosstown rival New York Giants on Pearl Harbor Day. Look for Ace (wearing #7) as he passes, blocks, tackles, punts, returns punts, and runs the football in this game played on Dec. 7, 1941.

Parker’s final pro football game came in a showdown against fellow Hall of Fame QB Otto Graham and the Cleveland Browns in the 1946 All-America Football Conference title game on Dec. 22, 1946. Despite Parker’s passing and punting, the Browns prevailed 14-9 in a close game against the New York Yanks on a snowy afternoon.  On a side note, Parker’s last-minute throw ended up in the hands of Graham who battled two receivers to intercept Ace’s pass and seal the victory for Cleveland. Although the Brooklyn defense held the Browns, the Dodgers were unable to execute on two plays before the clock ran out. 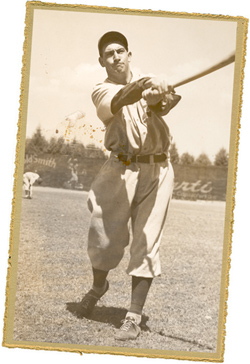 Parker had a lengthy career in baseball, the majority of which was in the minors. He did play 94 games over two seasons in the majors with the Philadelphia Athletics in 1937-38. He played all but five games in the infield with most of those games at shortstop. In all, he batted .179 that included a pair of home runs (one on his first-ever major league at bat), five doubles, a triple and 25 RBIs. He continued to play minor league baseball through 1952.

Much has changed in the playing rules since Ace Parker was born one century ago. Here are just a few items of note from the 1912 rule book.

A fourth down was added that for an offensive team to gain a first down.

If a pass was thrown out of bounds without touching the ground, the defense was awarded the ball.

“Flying Tackles” were illegal. A player must have had one foot on the ground when attempting to tackle. The penalty was a loss of five yards from the spot of the foul.

Hall of Fame cornerback Darrell Green was honored in his hometown of Houston, Texas on Tuesday.

Pro Football Hall of Fame running back Thurman Thomas was honored in his hometown on Monday, May 14.