Enshrinement Published on : 7/2/2012
Art McNally, former Director of Officiating for the National Football League, game official, and a long-time officiating innovator, has been named the recipient of the Pro Football Hall of Fame’s Daniel F. Reeves Pioneer Award. He will be honored during the Pro Football Hall of Fame Enshrinement Festival in Canton, Ohio, on Friday August 3, at the Enshrinees’ Gold Jacket Dinner.

Established in 1972 and named after the late Hall of Fame owner Daniel F. Reeves, the Pioneer Award is given periodically to an individual who has made significant innovative contributions to professional football. McNally is just the eighth person to receive the prestigious award.

McNally, who turned 87 yesterday, has dedicated his entire professional life to officiating. He served as an NFL official for nine years (Field Judge, 1959; Referee 1960-67) before he was hired as the NFL’s Supervisor of Officials in 1968. Upon his appointment he instantly installed the first formal film study program for training and evaluation of football officials in professional sports.

He eventually headed a department of five individuals who coordinated and directed a staff of 112 game officials. He was responsible for the scouting, screening, hiring and grading of the crews that work each NFL game. McNally is credited with bringing technology to NFL officiating and introduced the highest level of training for the officials by using video and techniques that NFL teams used with players.

Known as the "Father of Instant Replay," McNally introduced the system to the NFL. Through his leadership, instant replay has become an accepted part of the game and has spread to all major sports in America. 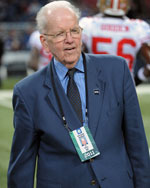 Art retired from the NFL in 1991 but quickly accepted a position as Supervisor of Officials for the World League of American Football in 1992. At the same time he continued to serve as an NFL League Consultant through 1994.

In 1995, he returned to the NFL office to work as an Assistant Supervisor of Officials during each football season and continued in that capacity until 2007. He presently works with the NFL Game Officials on a weekly basis in the capacity of a League Observer.

In 2002, Commissioner Paul Tagliabue created the Art McNally Award to annually honor an NFL game official who exhibits exemplary professionalism, leadership and commitment to sportsmanship on and off the field.

McNally was a teacher and coach in the Philadelphia school district for 18 years before joining the league office in 1968. Up until that point he had officiated more than 3,000 football, baseball, and basketball games during a 22-year period. He also worked one year in the NBA.

The 2012 NFL Season will mark McNally’s 53rd year of service to the NFL.


Past recipients of the Pioneer Award

Ohio Governor John Kasich held a press conference inside the Hall of Fame’s Event Center to talk about the state’s new tourism bill.

The drafted players of AFC teams wrapped up the 2012 NFL Rookie Symposium with a tour of the Pro Football Hall of Fame.