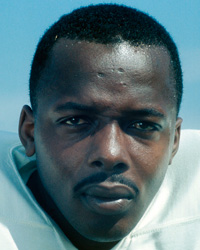 David "Deacon" Jones, the Pro Football Hall of Fame defensive end who coined the term “sack,” has died. The Class of 1980 inductee passed away on Monday evening after lengthy illness. He was 74.

He did more than perhaps any other player to make modern-day pro football fans acutely aware of the fast, tough and mobile defensive linemen who existed to make life miserable for National Football League quarterbacks.
Jones started his NFL career as an obscure 14th-round draft pick of the 1961 Los Angeles Rams but he quickly grabbed the headlines with the kind of crowd-pleasing play previously displayed only by offensive ball-handlers. He excelled in the pro football world for 14 seasons and many insist he was the finest defensive end ever.
“We mourn the loss of such a great football legend. Deacon Jones undoubtedly left his imprint on the game of football as one of, if not the, most devastating pass rusher ever to step on a football field,” shared Steve Perry, the Hall of Fame’s president/executive director.
“Deacon was a great friend and loved the Hall of Fame very much. He was greatly respected by his fellow Hall of Famers and was long considered their inspirational leader who epitomized what it means to be a part of this special fraternity.” Perry continued. “We will keep his wife Elizabeth and the entire Jones family in our thoughts.”
Jones’ impact on the game was cemented with his election to the Pro Football Hall of Fame in his first year of eligibility.
“Every man is free to rise as far as he is able or willing,” Jones shared in his closing comments of his enshrinement speech from the Hall’s front steps on Aug. 2, 1980. “But, it is only the degree to which he thinks or believes that determines the degree to which he will rise.” 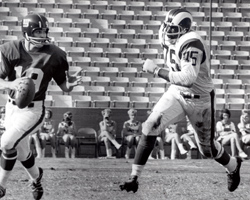 Deacon was as innovative, quick thinking and flamboyant out of uniform as he was fabulous on the field. Even before he became a great star, he was determined to attract his share of attention.
One of his first acts as a Rams rookie was to put aside his given name "David" and substitute a nickname "Deacon."
"No one would remember a player named David Jones - there are a thousand David Joneses in the phone book," he reasoned. "I picked out Deacon because it has a religious connotation and it would be remembered in the violent pro football world. When the Rams sent out my player questionnaire, I simply listed my name as Deacon Jones. From then on, that's what I was."
Jones followed shortly thereafter by creating the term "sack" now commonly used to describe the tackling of the passer behind the line of scrimmage. Even in his college years, Jones had had some success in that art, but it was hard to capture it in a headline.
"We needed a shorter term ," Jones pointed out. "I gave it some thought and came up with the term 'sack'. Like, you know, you sack a city - you devastate it. And the word is so short you can even get Deacon in front of Jones in some headlines."
He set the standard for sacking quarterbacks in the NFL. However, his names cannot be found in the NFL’s Record Book since the sack did not become an official stat until 1982. According to research by pro football historian John Turney, Jones amassed 173.5 sacks during his NFL career. That total would rank today as third most behind Bruce Smith (200) and Reggie White (198).
Coming from a small college with an even smaller coaching staff, Jones had literally hundreds of things to learn. Fortunately, for the Rams he was a fast learner and soon became a master at the sacking business.
Noted for his intense desire, even in practice, the 6'5", 272-pound Jones became one of the first defensive ends to go all out from sideline to sideline on every play.
"It used to be that the big defensive linemen just sat in one place and waited for the play to come to them," Deacon noted. "But mobility is what makes a football player exciting so I made myself exciting as hell."
Often tabbed as the "Secretary of Defense," Jones felt his most creative innovation was the head slap, since outlawed, where the pass rusher sharply slapped the blocker's helmet at the snap of the ball in an effort to get an extra step needed to break free. Appropriately his 1996 autobiography was titled after the move.
As dedicated as Deacon was to what he saw as "a game of civilized violence," he was also noted for his extremely clean play. Once he even sustained a minor ankle injury himself rather than hit a quarterback who had just released a ball.
"I'm against cheap shots," Jones proclaimed. "You should play clean and shoot square. If you play the game right, you can protect yourself from physical harm."
Jones was living proof that this can be true. He ended his career without facing surgery. While Deacon did suffer the usual assortment of injuries, he came out with all of his ligaments and cartilage and missed only three games in 14 seasons. 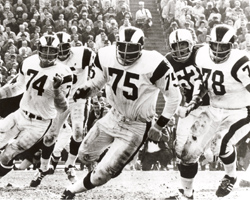 For 10 of his 11 seasons as a member of the Rams, he teamed with defensive tackle Merlin Olsen to give the Rams a solid all-pro defensive left side. Jones and Olsen perfected the stunt, or loop, maneuver, which was designed to confuse the defenses that resorted to double-team, and even triple-team maneuvers to combat the Jones pass rush. Just before the snap, Jones would step to his right - to the inside - and Olsen would loop behind Jones, to the outside.
The aim was to create a gap for one or the other or both to pour through to rack up another sack or to bar the way on a running play. For many years, L.A. was the NFL's top defensive team and their famous "Fearsome Foursome" front line, with Jones and Olsen in key roles, was a major reason.
By far, he was the most decorated and honored Rams player during the 1960s. Deacon was a consensus all-pro six straight years from 1965 through 1970 and played in eight Pro Bowls.  He was named the NFL's Defensive Player of the Year by his fellow players in back-to-back seasons in 1967 and 1968.
Jones can owe his start in pro football, no matter how inauspicious it may have been, to the alertness of Rams scouts Eddie Kotal and Johnny Sanders. The two were studying films from a small Mississippi college with a specific interest in a running back who was supposedly a speed-burner.
Suddenly they realized the real speed -burner in the film was a defensive lineman from Mississippi Vocational College who simply outran the running back every time he had the ball. Kotal and Sanders figured that anyone as big and as fast as Jones was worth a low-round gamble in the coming college draft.
Deacon’s earlier football life was less than exciting. Born in Eatonville, Florida, on Dec. 9, 1938, he played his high school football at Hungerford High (now Wymore Tech) in nearby Orlando. But as Jones admits, he wasn't considered among even the top three or four prospects on the team.
He had just one college offer, that at South Carolina State where as a sophomore in 1958, he was an all-conference tackle and the team's most valuable lineman. He did not play in 1959 and wound up at Mississippi Vocational in 1960 just in time for the Rams to make their fortunate discovery.
Interestingly, three coaches - George Allen, Harland Svare and Tommy Protho - dominated Deacon's pro career in significant but different ways. Allen coached the Rams from 1965 through 1970 when Jones was at his absolute best. Later, Allen brought him to Washington for a final season in 1974.
Svare was the Rams' coach earlier in Jones' career and years later when he was the Chargers head man in 1972, he engineered a trade to bring Deacon to his team. In San Diego Jones did have one excellent season, serving as defensive captain and leading the team in tackles.
Protho, on the other hand, had the distinction of disposing of Jones twice. The first time he was the Los Angeles coach who traded Deacon to San Diego. Two years later, he took over the San Diego reins just in time to send Jones off to Washington.
Deacon agreed to play one last season in Washington only because he wanted a championship ring and he felt the Redskins had a good chance to win in 1974. Before the next season he made his retirement official when he told the assembled media, "No one had to tell me to quit. My body told me."
Along with his great playing skills and performances, Jones will be remembered for his colorful, unconventional manner both on and off the field and his cocky, confident, highly quotable utterances.
"I'm the best defensive end around," he announced honestly and proudly during his glory years with the Rams. "I'd hate to have to play against me!"
Previous Article

A look back at the life and career of Deacon Jones.

Hall of Fame quarterback Joe Namath cut the ribbon to officially open the Hall of Fame on Saturday after a two-year expansion and renovation project.