Fact or Fiction? Hall of Famer Elroy Hirsch was nearly stripped naked by fans after a game. 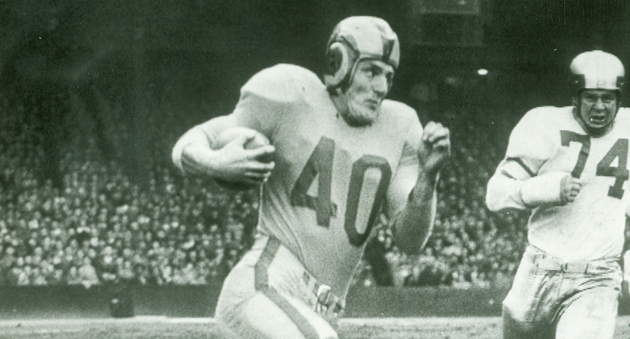 Hall of Fame end Elroy (Crazylegs) Hirsch is most noted as one of the NFL’s first big-play receivers. His penchant for making huge plays was his trademark during a career that began with the Chicago Rockets of the All-America Football Conference in the late 1940s and reached great heights with the Los Angeles Rams in the NFL from 1949 to 1957.

His career numbers were staggering for the era in which he competed as he racked up more than 7,000 yards on 387 catches and scored 60 touchdowns. In 1951, he scored a remarkable 17 touchdowns of which 10 came on long bombs that helped him set the then NFL record with 1,495 yards that season.

Hirsch originally hinted at retirement in 1954. His "final" game came during the Rams’ 35-27 win over the Green Bay Packers in the season finale on Dec. 12, 1954. The Rams honored their great star with a halftime ceremony.

Per usual, he shined for the Rams as he caught five passes for 119 yards in the game. Then, a bizarre scene unfolded after the final gun sounded. As Hirsch began making his way off the field one last time, he was engulfed by a large crowd of young fans. Fearing for his safety, he began removing parts of his uniform and tossing it in an effort to disperse the group of overzealous admirers.

“They actually started to trample me,” he once recalled. “So I took off my jersey and threw it one way. And a pack of them went off after it. I took off something else and threw it the other way and got a few more out of the way. Little by little, I bartered my way off the field.”

By the time he arrived in the locker room “semi-nude,” as described by a sportswriter, Hirsch was down to his shorts and pads around his waist and tape on his ankles.

After injuries depleted the Rams lineup, Hirsch was convinced not to retire and played three more seasons. Lucky for him, he walked off the field at the end of the 1957 season without incident.

Jonathan Ogden will get his Hall of Fame ring during halftime of the Baltimore Ravens game on Sunday.

Fact or Fiction? Elroy Hirsch was nearly striped naked by fans after a game.