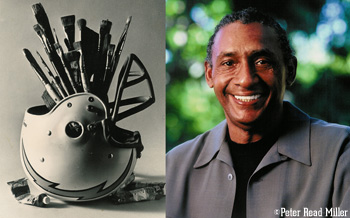 The “artistry” of football will be on display at the Pro Football Hall of Fame starting on Thursday, June 19. That is when a special exhibit “From Pads to Palette, Celebrating the Art of Ernie Barnes (1938-2009)” will open for a four-month stay at the museum. It will mark the first time that the Pro Football Hall of Fame has hosted an art exhibit by a former professional football player.

Barnes credited his college art instructor, Ed Wilson, for laying the foundation for his development as an artist and as the influence behind his unique style of elongation and movement. “Ed Wilson told me to pay attention to what my body felt like in movement,” Barnes explained. “He made me conscious of the fact that the artist who is useful to America is one who studies his own life and records it through the medium of art, manners and customs of his own experiences.”

Critics have defined Barnes’ work as neo-mannerism, as it is reflective of the style of Mannerism, the period between the New Renaissance and Baroque periods of European Art, around 1520 and 1590.

Barnes’ life experiences, including those of a professional athlete, are obvious in his work. “Within that elongation,” he once explained, “there’s a feeling and attitude and expression. I hate to think had I not played sports, what my work would look like.”

Barnes was the recipient of numerous awards and recognition and commissions, including in 1984 being appointed the Official Sports Artist for the Games of the XXIII Olympiad. The following year he was named the first Sports Artist of the Year by the United States Sports Academy, and more recently in 2004 was named America’s Best Painter of Sports by the American Sport Art Museum & Archive.

Although Barnes’ sports art earned him much acclaim, his overall body of work encompasses many different themes, including “a pictorial background for an understanding into the aesthetics of black America,” which he portrayed in “The Beauty of the Ghetto” exhibition of 35 paintings that toured across the United States from 1972 to 1979.

Barnes is also remembered for his popular music album cover artwork for such artists as Marvin Gaye, Curtis Mayfield, The Crusaders and B.B. King. Barnes’ painting “Sugar Shack” earned him international exposure when it was used during the opening and closing credits during the fourth season of the sitcom “Good Times” television show. Throughout the six-season run of “Good Times,” most of the paintings created by the lead character J.J. were actually works by Barnes. In 1976 Marvin Gaye asked permission to use “Sugar Shack” as the cover art for his album “I Want You.”

“From Pads to Palette, Celebrating the Art of Ernie Barnes,” will be exhibited at the Pro Football Hall of Fame from June 19 through Nov. 30, 2014. The exhibit is included in the regular price of admission.

The Pro Football Hall of Fame is open seven days a week. Summer hours of 9 a.m. through 8 p.m. are in affect through Labor Day.


A private reception was held on June 18 to officially open the exhibit. Barnes' widow Bernie (bottom right), along with Luz Rodriguez Tucker (bottom left), special art trustee of Barnes' estate, were on hand. Bernie donated the famous "The Bench" painting to the Pro Football Hall of Fame. 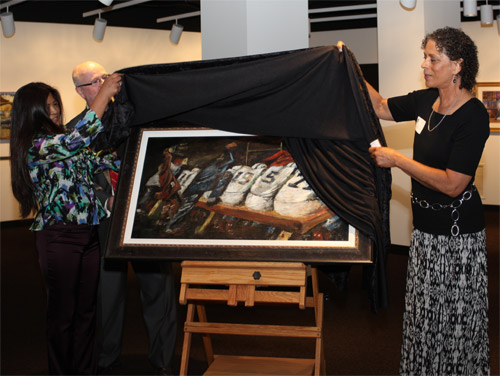 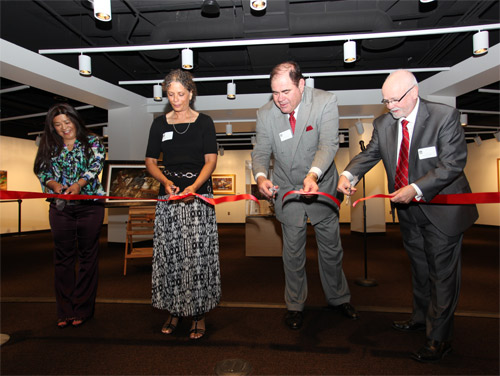 Throwback to the '80s and a memorable game to open the decade.

Two of the three top receivers taken in the 2014 NFL Draft will see their first game action as NFL players as Sammy Watkins and Odell Beckham, Jr. take center stage during the 2014 NFL/Hall of Fame Game. See who else started their pro careers in Canton.