Sculptor Blair Buswell to appear at Hall of Fame on Friday

Blair Buswell, a sculptor of Hall of Fame bronzed busts, will appear at the Pro Football Hall of Fame on Friday afternoon. He will participate in a program with the Hall’s guests from 1-2 p.m. The session is included with the price of admission.

The “Conversation with Blair” will be held inside the Hall’s Gold Jacket Lounge, which is adjacent to the Hall of Fame Gallery, the permanent home to much of Buswell’s work. He is well known for his portraiture and, since 1983, sculpted nearly 100 of the Hall of Fame bronzed busts.

Guests on hand at the Hall on Friday can join in the conversation with Buswell. Football fans everywhere are also invited to engage by tweeting questions to Buswell by using #AskBlair.

The Pro Football Hall of Fame is open daily from 9 a.m. to 5 p.m. Extended summer hours of 9 a.m. to 8 p.m. begin on Saturday, May 23 and continue through Labor Day. More information about visiting the Hall of Fame can be found at ProFootballHOF.com/PlanYourVisit.

Buswell was honored in 1990 as the Sport Artist of the Year by the United States Sports Academy; the first sculptor ever to be so honored. The talented sculptor has always been fascinated with the human figure. He likes the challenge of capturing the gesture, mood, and expression of a person in thought which brings a sense of life to his work. Blair has also studied the skilled athlete in action and has used his artistic talents to sculpt famous sports figures of our day, including Jack Nicklaus, Oscar Robertson, Doak Walker, and Paul “Bear” Bryant. In addition, he enjoys sculpting a wide variety of subject matter in a range of sizes. His pieces are displayed in museums, private collections, college campuses, sports complexes and fine art galleries nationwide. 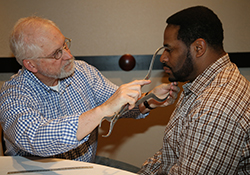 In 2010, Buswell installed a larger than life size standing figure of Pro Football Hall of Fame defensive tackle Merlin Olsen at Utah State University in Logan, Utah. He also installed a twice-life size figure of General Robert Neyland in Knoxville at the University of Tennessee football stadium that bears the General’s name. In 2012, an 8’ figure of Coach John Wooden was installed at the entrance to the renovated Pauley Pavilion on the campus of UCLA.

His traditional training has prepared him well, and Buswell continues to push himself to learn new skills and techniques. The largest and most challenging project of his career was completed in 2009. In a collaborative effort, he and fellow sculptors Ed Fraughton and Kent Ullberg have produced larger-than-life-size works for downtown Omaha Nebraska. Part of this project was the creation of a wagon train, one city block long. Buswell accepted this new and daunting task as yet another opportunity to broaden his skills. Along with his figurative work, he has now sculpted mules, oxen, horses, and other animals. He loves the old west and is excited to have had the opportunity to permanently capture its spirit as exemplified by the early pioneers.

The votes have been tabulated and the public has made their choice. The Pro Football Hall of Fame, according to The (Cleveland) Plain Dealer and Cleveland.com, is Ohio’s Top Tourist Attraction.