Every year hundreds of thousands of football fans walk through the Pro Football Hall of Fame. By the time they are done with their tour, they can’t help but to feel inspired by all of the Excellence throughout the museum.

Share your greatest memories with us on the Hall’s Facebook about your experience at the Hall of Fame. Your story has a chance to be featured each week on ProFootballHOF.com. A prize will be awarded to you if your story is selected.

I returned home on leave to Canton, Ohio, from Honolulu, Hawaii in August of 1985 where I was serving with the U.S. Air Force.  During my visit home, I decided to bring my son, who is also named Kevin, for a father/son visit to the Pro Football Hall of Fame.

While I knew that my son, who was only a year and a half old, wouldn’t remember the visit, I did know that it would be an experience we would talk about later on in life and it would set the foundation for our relationship.

We now look back at the picture and we smile and reminisce. While we both appreciate the many trips and stops we have made together through our lives, we both agree that the August 1985 visit to the Pro Football Hall of Fame was the most special.

We also never realized that one day we would be working at the Pro Football Hall of Fame. My role at the Hall is to serve as the Vice President of Operations & Facilities and my son (he is a nurse in Las Vegas where he lives with his wife and two children) returns home almost every summer to help me with the Hall of Fame Weekend festivities.  During one of those visits we were working outside together and my son stopped me as we were walking towards the museum. I was confused at why we were stopping until he pointed at the entrance of the Hall of Fame which was about 100 yards away. He said to me “Do you ever stop to appreciate the things that all of you guys are doing here?” I paused for a moment but before I could answer he continued to point at the museum and he said “That’s going to be there for my grandkids one day.”

I couldn’t have been prouder knowing that one day my son will have the same experience at the Hall of Fame with his kids that he and I did when we visited in 1985. 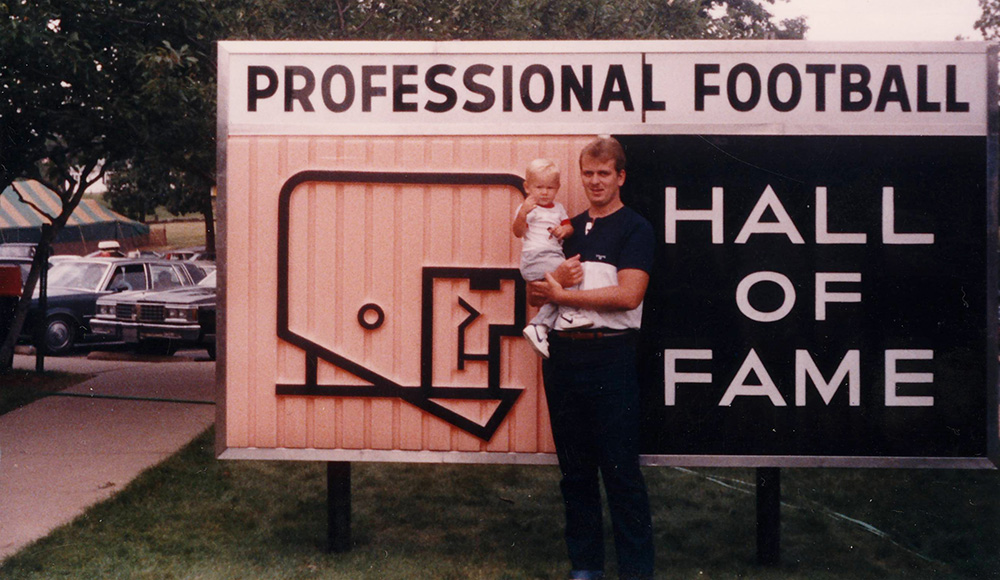 Off to the Races

Football fans were able to fill their offseason void by participating in the second annual Gold Jacket 5K Race and third annual Pro Football Hall of Fame Marathon on Saturday and Sunday in Canton.

Football isn’t just a job for NFL referee John Parry, it’s a family affair. John’s father Dave (below) was a highly accomplished member of the football officiating fraternity. John and his family want to honor the late Parry a unique way. The best way to do that in their minds was to participate in the Hall of Fame’s Gold Jacket 5k Race on Saturday, April 23.