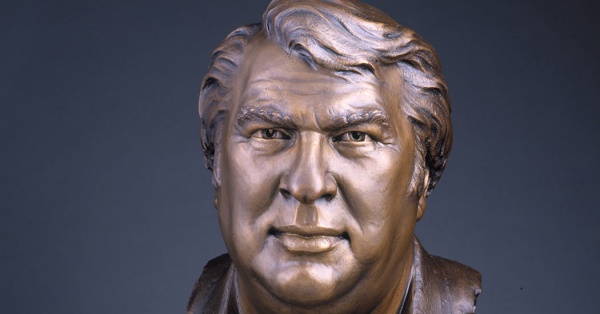 The Pro Football Hall of Fame has collaborated with StatMuse, the leader in conversational AI for sports, to create an Interactive Bronzed Bust. The first of its kind innovation will be unveiled at the Super Bowl Experience in Atlanta and rolled out shortly thereafter at the Hall of Fame.

StatMuse, in collaboration with the Hall of Fame, has pioneered a technology that combines artificial intelligence (AI) with dynamic animation and augmented reality (AR) to create a truly unique and interactive experience for fans, allowing them to converse with one of the most iconic figures in sports and entertainment. The talking Bronzed Bust of Hall of Fame coach John Madden will be shared with fans who attend the upcoming Super Bowl Experience in Atlanta.

Madden, in his 2006 Enshrinement speech, humorously shared his thoughts about the immortality of the Bronzed Busts in Canton.

“Here is the deal: I think over in the Hall of Fame, that during the day, the people go through, they look at everything. At night, there's a time when they all leave. All the fans and all the visitors leave the Hall of Fame. Then there's just the workers. Then the workers start to leave. It gets down to there's just one person. That person turns out the light, locks the door.

“I believe that the busts talk to each other. I can't wait for that conversation, I really can't. Vince Lombardi, … Reggie (White), Walter Payton, all my ex-players. We'll be there forever and ever and ever talking about whatever. That's what I believe. That's what I think is going to happen, and no one's ever going to talk me out of that.”

“John Madden’s vision from his enshrinement speech is now a reality thanks to transformational technology,” Hall of Fame President & CEO David Baker stated. “Fans visiting the Hall of Fame will soon be able to interact with the Bronzed Busts to listen to inspiring stories and learn how the values from the Game have shaped the lives of Greatest Heroes of the Game.”

“Now, not only will a Hall of Famer’s image be preserved through the Bronzed Bust for 40,000 years at the Pro Football Hall of Fame but their life’s message will as well,” Baker added.

Fans will soon be greeted into the Hall of Fame Gallery in Canton by Madden’s interactive bust. With hours of storytelling built into the experience at launch, fans can ask, “What was it like getting carried off the field after winning the Super Bowl?” or “What was it like to coach opposite Vince Lombardi?” and get lost in conversation with the legendary coach.

StatMuse creates an interactive digital persona by first capturing a series of specialized images and high-resolution 3D scans of the original bust. A 3D character artist then constructs a virtual bust, optimized for a mobile-based AR experience. StatMuse used its proprietary in-studio software to record Madden's iconic voice and storytelling flair, simultaneously capturing audio and facial motion data. When fans hold a mobile device in front of John Madden’s Bronzed Bust, they will see it come to life on-screen – moving, talking and interacting with them.

“It’s been a privilege to be involved in such an amazing project that preserves John’s legacy in such a powerful way,” said Adam Elmore, CTO and Co-Founder of StatMuse. “By leveraging our innovative digital persona platform, we were able to create a truly groundbreaking experience that marries the latest in conversational artificial intelligence, augmented reality, real-time animation and facial motion capture to give fans a truly unique and personal experience with one of their heroes. We can’t wait for fans to experience the same joy we felt while listening to John tell stories in the studio through this new experience at the Pro Football Hall of Fame.”

The Interactive Bronzed Bust will start engaging guests at the Pro Football Hall of Fame in Canton shortly after Super Bowl LIII.

The project is part of the Hall of Fame’s ongoing museum development that includes an infusion of interactive technology that supports the important mission to “Honor the Heroes of the Game, Preserve its History, Promote its Values & Celebrate Excellence EVERYWHERE.”

Energy leader receives naming rights for Center for Excellence; Will support clean energy initiatives for the Village and Pro Football Hall of Fame.