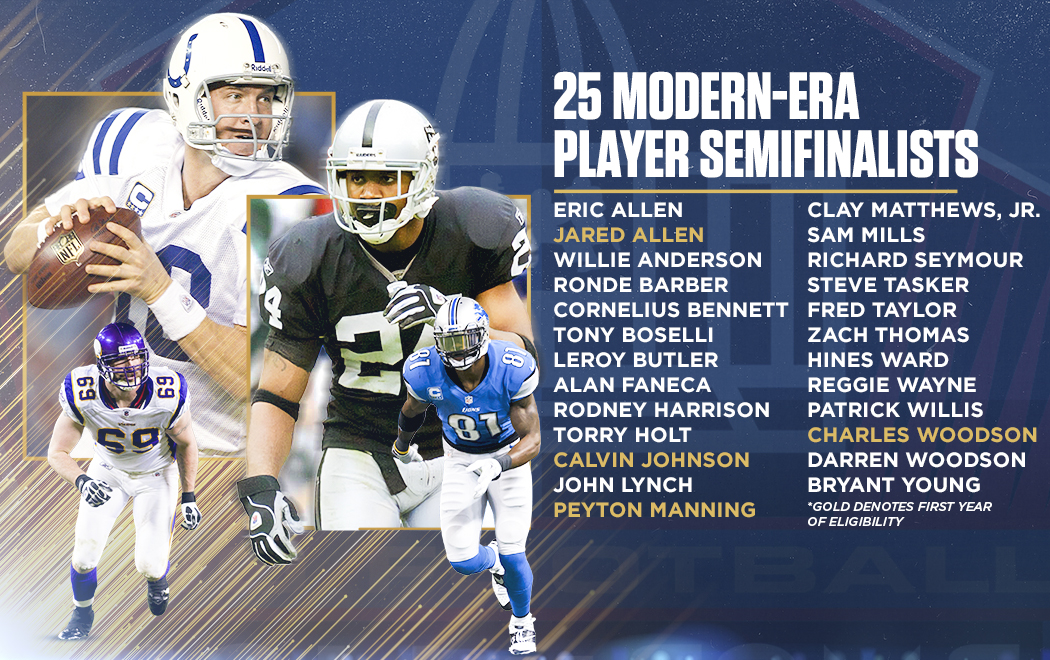 Four first-year eligible players – Jared Allen, Calvin Johnson, Peyton Manning and Charles Woodson – are among the 25 Semifinalists for the Pro Football Hall of Fame’s Class of 2021.

The list also includes four players – Eric Allen, Willie Anderson, Cornelius Bennett and Rodney Harrison – who are Semifinalists for the first time although previously eligible for the Hall of Fame. All other players on the 2021 list have been a Semifinalist at least one other time.

The year-round Selection Process aligns with the Pro Football Hall of Fame’s important Mission to “Honor the Heroes of the Game, Preserve its History, Promote its Values and Celebrate Excellence EVERYWHERE.”

The following is the list of 2021 Modern-Era Semifinalists, including their positions, years and teams. Also listed are the number of times and years the candidate has been named a semifinalist since this reduction vote was added to the Bylaws for the Selection Committee in 2004.

The list of Semifinalists, which also was announced live today on NFL Network, was reduced from an initial group of 130 nominees announced in September. The next step in the Selection Process comes when the Semifinalists are trimmed to 15 Modern-Era Finalists. That list increases to 18 Finalists with the inclusion of the recommended nominees of the Hall of Fame’s Coach, Contributor and Senior Committees: Tom Flores, Bill Nunn and Drew Pearson, respectively.

The Class of 2021 will be determined and announced during the week leading up to Super Bowl LV in Tampa, Fla. While there is no set number for any class of enshrinees, the Bylaws for the Selection Committee provide that between four and eight new members will be selected.

The Coach Finalist, Contributor Finalist and Senior Finalist are voted “yes” or “no” for election at the annual selection meeting and must receive at least 80% support from the Committee to be elected. The Modern-Era Finalists will be trimmed during the meeting from 15 to 10, then from 10 to five. The remaining five finalists will be voted on individually, “yes” or “no,” and must receive the same 80% positive vote as the Coach, Contributor and Senior Finalists to earn election to the Pro Football Hall of Fame.

The annual Pro Football Hall of Fame Fan Vote presented by Ford continues since its launch in September. Fans can vote as many times as they wish at www.profootballhof.com/fanvote to predict the five Modern-Era players who will be elected to the Hall of Fame as part of the Class of 2021.

Fans who vote automatically become eligible for several sweepstakes prizes, including a Grand Prize trip for two (2) to the 2021 Enshrinement Week Powered by Johnson Controls in Canton.

This marks the 11th consecutive year that Ford, the Official Automobile of the Pro Football Hall of Fame, has invited fans to predict the outcome of the annual Hall of Fame class. More than 25 million votes have been cast in the past decade.

Official Ticket Packages for the 2021 Pro Football Hall of Fame Enshrinement Week Powered by Johnson Controls are on sale now from Hall of Fame Experiences. Head to www.HOFExperiences.com to secure your spot in seeing the Class of 2021 enshrined.

Ticket packages also can be found by calling 844-751-0532. Packages range from single-day offerings to four-day experiences that include premium seating, VIP access and exclusive parties and more.

After starring at Illinois he joined the Chicago Bears and made his NFL debut on Thanksgiving Day 1925.

This week, all fans can learn something new as Coach Levy steps into the Hall of Fame Spotlight.