Record-Setting First Round At 2022 NFL Draft 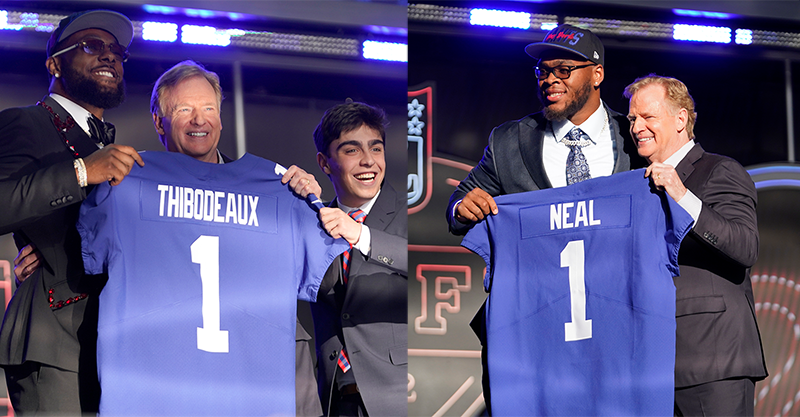 The 2022 National Football League Draft opened Thursday night in Las Vegas. This is the time championship teams are built.

Scouts have been on the road all year scouring the country for the best prospects. Their days have been spent taking notes, breaking down film, watching live game action, interviewing players and coaches and cataloging notes and stats from the NFL Combine in Indianapolis.

Now, each NFL club gathers its personnel departments, coaching staffs and all the information and video that has been collected throughout the scouting process to add talent to their teams.

Nine teams selected multiple players in the first round of the NFL Draft on Thursday night, which was a record. That shattered the previous record, which was six, and happened in 2020, 1989, 1974 and 1973.

Over the years, many clubs have done great work building their teams through the draft.
Franchises like the New England Patriots have put together a solid system of identifying the types of players who fit their scheme. Other teams, like the Dallas Cowboys, New York Giants and the Philadelphia Eagles from the NFC East, all do a solid job of evaluating talent in the draft.

However, arguably no club has done it better or more consistent than the Pittsburgh Steelers, and it all started in 1969 with the hiring of Hall of Fame coach Chuck Noll. From 1969 to 1974, Noll and the Steelers drafted nine future Hall of Famers: Joe Greene, Terry Bradshaw, Mel Blount, Jack Ham, Franco Harris, Lynn Swann, Jack Lambert, John Stallworth and Mike Webster.

The Browns did it in 1957, under the direction of Paul Brown, when they chose Jim Brown, Henry Jordan and Gene Hickerson (a future selection).

The Packers drafted Jim Taylor, Ray Nitschke and Class of 2018 Hall of Famer Jerry Kramer in 1958 and gave Coach Vince Lombardi a great foundation to build his dynasty teams of the 1960s.

As impressive as three Hall of Famers by the same club in the same draft is, it all comes back to the Steelers. Remarkably, they are the only franchise to select four future Hall of Fame players in the same draft with Swann, Lambert, Stallworth and Webster in 1974.
While neither the draft nor the scouting process is an exact science, and every year there are more draft misses than All-Pro players selected, the course of an entire franchise can be changed if it hits on a draft class.

When a franchise can understand exactly the kind of team they want to be and what type of players they need. Each player can have the confidence to play their specific role and the T.E.A.M (Together Everyone Achieves More) begins to grow. Together the team will begin to win, and with team success, individual stats and accolades are sure to follow.
Here is the complete list of these memorable draft combinations:

Next
Go back to all blog listings