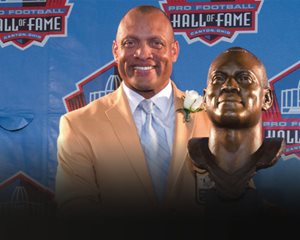 The Pro Football Hall of Fame is ready for the 2022 NFL playoffs, and the newest episode of “The Mission” is now available.

Throughout the ’22 NFL season, the vision of "The Mission" podcast is to connect viewers and listeners with Hall of Famers, to help break down some of the league’s primetime matchups, historical matchups and current news storylines, and to learn about the treasured life lessons the game of football has taught these gridiron warriors.

To help wrap up the 2022 NFL season and look ahead to the first round of the wild card playoff round, joining "The Mission" is Arizona Cardinals and St. Louis Rams legend AENEAS WILLIAMS, a member of the Pro Football Hall of Fame’s Class of 2014.

Williams was a walk-on at Southern University and by his senior season he led the nation in interceptions. That was a precursor of what was to come.

The Phoenix Cardinals drafted Williams in the third round, 59th player overall, of the 1991 NFL Draft. Over the next 10 seasons with the Cardinals and four final years with the St. Louis Rams he established himself as one of the finest defensive backs to play the game.

Williams starred at cornerback for the first 12 year of his career before he moved to safety. He earned Pro Bowl nods at both positions, seven times at cornerback and once as a safety.

On "The Mission," Williams gives his analysis of this week’s playoff matchups, the contribution of each 15 Modern-Era Player Finalists for the Pro Football Hall of Fame’s Class of 2023 and the new Aeneas Williams Award.

The Oklahoma Sports Hall of Fame announced it has implemented the Aeneas Williams Award, which will go to the top defensive back playing at a Division I HBCU institution. The award will be given based on performance on the field, athletic ability and character.

“I am honored and grateful to the Oklahoma Sports Hall of Fame and the Jim Thorpe Association for this amazing opportunity to use my name to honor the nation’s top defensive back from Historically Black Colleges and Universities,” Williams said in a news release.

Click here or watch below for the full podcast.

Gold Jacket Spotlight: Warren Moon called ‘a winner on and off the field’

This week’s Gold Jacket Spotlight shines on Warren Moon, a player who would highlight his talents to the non-believers, resulting in enshrinement into the Pro Football Hall of Fame in 2006.