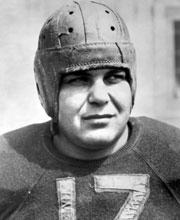 Albert Glen Edwards -- much better known as “Turk” first gained prominence as an All-America tackle at Washington State and as a star on the Cougars' 1931 Rose Bowl squad. When he finished college a year later, he received offers from three National Football League clubs and he chose the highest bid –- $1,500 for 10 games from the newly organized Boston Braves, a team that would later take the name Boston Redskins and then move to Washington in 1937.

Signing Edwards was a sensational move for the new team for Turk responded with nine superior seasons, winning All-NFL honors from major media outlets every year of his career except his last one. A 6-2, 255-pound tackle does not create unusual notice today, but in the 1930s, a player of that stature stood out like the Rock of Gibraltar. And that is the way Edwards played the game — typifying overwhelming strength and power and yet he possessed enough agility to do a superb job every minute of every game.

Like many of his time, Turk was an iron man, playing on both offense and defense. Edwards continued to stand out long after the Boston Redskins had become the Washington Redskins, but almost unbelievably, the seemingly indestructible Edwards was injured at a coin-tossing ceremony prior to a game against the New York Giants in the 1940 season. After calling the coin toss and shaking hands with the opposing team captain, Edwards attempted to pivot around to head back to his sideline. However, his cleats caught in the grass and his oft-injured knee gave way, bringing his season and career to an unusual end.

He stayed on with the Redskins first as an assistant coach and then as head coach until after the 1946 season. Then after 17 straight campaigns with the Redskins, Edwards retired from pro football. 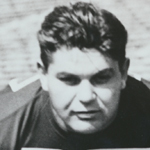 Drafted: Edwards played prior to the NFL Draft being implemented.

Thank you very much Muzzy. I was supposed to give a two-minute speech- you’ve already given it. About everything I was going to say, but we have known Turk and his family for many, many years. Not only this being a great weekend, this is my fourth time down here, and it’s getting better and better every year which makes it even better having Turk and his family here, ‘cause we haven’t seen them for a long time but we’ve always felt that we were the best of friends and we always have been said we played college football together.

On a real strong team, probably the last strong team, the last team that ever that went to the Rose Bowl that won the Pacific Coast Championship. Turk was an All-American tackle on that team. He played a very strong Alabama team in the Rose Bowl, we got beat. Turk Edwards made tackles all over the field in that game. A couple of years ago, I got a hold of a publication from the University of Alabama and Turk is on their all-time. All-opponent team, and Alabama has a pretty good schedule and they’ve played against some good tackles. Turk was a natural athlete.

They talk about Jim Thorpe, and so forth. Jim Thorpe went in, of course, for different sports. Turk could have been a three or four sport man in college, but he wanted to concentrate on football. I played basketball with him, a weight man in track, he was also a pitcher in baseball, but he wanted to concentrate on football, he liked the action, he liked the contact. From college, he went into professional football with the Washington Redskins. We played many games against each other; we were still the best of friends except on that football field. He hated the Giants on that football field, and I hated the Redskins, and to prove it to each other, we used to take pot shots against each other all during the ballgame, but after the game, we were friends.

If I was down in Washington, I would be his guest that night, and if he was up in New York, he would be my guest. He went on in professional football, made the all-pro team many years. Later on, he became the head coach of the Washington Redskins. Turk was respected by his teammates, by the coaches, by the public, while he was a player and the coach. I know the Giants respected him tremendously, and the 15 years that I played professional football it was either the Redskins or the Giants they won the Eastern Division Championship, no other team ever got in. I think, Turk, I’ll check with you later, but we just about broke even. One had to have seven and one had to have eight, I think it was the Giants that has eight. So, that game was, anytime we played the Giants, the Redskins it was very important game and our players, the Giants players never looked forward to playing against Turk Edwards because he would be at his peak. Because it was the pitch game, and they respected him.

They felt that Turk was the greatest professional football tackle that we ever had to play against. In all the years that he played he was not only a man that had the ability, he had strength, He was a big man for that time. You wouldn’t say now if you would compare him with some of the 273, 80- or 90-pound football players that he’s so big, but at that time, he was the big man. But he has that agility and he had that speed, he had leadership, and he had football brains. He was very smart, but the thing that I remember about Turk Edward more than anything else was he was a true sportsman, he was a true gentleman and hew still is. I’ll give you Glen Turk Edwards.

Thank you, Mel, you didn’t leave me very much for me to say. I want to say this, it gives me great pleasure to have been selected to join this elite group of men in Pro Football’s Hall of Fame. It certainly is the greatest honor that could every happen to a professional football player, and I accept this honor with great pride and humility. Thank you.