"A man has to figure out what has to be done and how to do it. You have to be able to spin out of a block, recognize a play immediately and then react accordingly. I figure I’m as strong as anyone else; so getting the job done becomes a matter of pride and determination.” 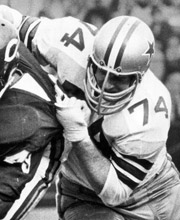 Bob Lilly was a two-time All-Southwest Conference pick and a consensus All-America choice at Texas Christian before the Dallas Cowboys' selected him as the franchise's first draft choice in 1961.

For the next 14 seasons, his play on defense was so outstanding that he became popularly known as "Mr. Cowboy." Bob starred as a defensive end in 1961 but then moved to a defensive tackle spot in his third season with even more sensational results. As a tackle, Lilly was a first-team AP All-Pro choice every year from 1964 through 1969, then again in 1971. He was a second-team choice in two other seasons.

Equally effective as both a pass rusher and a rushing defender, Lilly continually battled double-team and even triple-team opposition but he rarely was delayed in his pursuit of the ball carrier. Quick, agile and coordinated, he even scored four touchdowns in his career. One came on a 17-yard interception return in 1964 while the other three came on fumble recoveries. Altogether, he returned 18 fumbles for 109 yards.

Extremely durable, Bob played in 196 consecutive regular-season games. His only career "miss" came in the 1973 NFC Championship Game with Minnesota, when a leg injury put him on the bench. Postseason play became a way of life for the 6-5, 260-pound Olney, Texas, native. The Cowboys played in six NFL/NFC title contests in an eight-year period from 1966 through 1973 and also in Super Bowls V and VI. Bob also was selected to play in 11 Pro Bowls. He is the first player who spent his entire career with the Cowboys to be elected to the Pro Football Hall of Fame.

1971 NFC – Dallas Cowboys 14, San Francisco 49ers 3
Lilly started at right defensive tackle. He had two tackles and one sack for a loss of six.

(at time of his retirement following 1974 season) 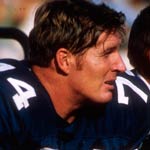 Drafted: 1st round (13th player overall) in 1961 by Dallas Cowboys. Also drafted in 1st round of 1961 AFL Draft by Dallas Texans

Honored guests, ladies and gentlemen. I realize that you don't recognize me, without my hat, but I am glad to be here today. One of the real pleasures of coaching is to be able to coach a great player, a blue chipper. That is why I am so privileged and honored to be here today to be the presenter because I have had the pleasure with Bob Lilly. It is not only an honor for me to be here, but it is also a special day for the Dallas Cowboys and all of our former players, for you see Bob played 14 seasons with the Dallas Cowboys from 1961 to 1974. He was the team’s first-ever draft choice, the first All-Pro selection, the first Pro Bowl player and is a charter member of our club's coveted Ring of Honor in Texas Stadium. Now he is the first player who has spent his entire career with Dallas to be elected into the Pro Football Hall of Fame in his first year of eligibility.

Back in 1972 I was commenting on Bob Lilly at an all-sports banquet and I made this quote: "There won't be another Bob Lilly in my time. You are observing a man who will become a legend.” I am still of the same opinion today, because I watched too many game films of Bob Lilly in action. He spent a whole career wading through two or three blockers to achieve his great record. His record is excellent. He was a mainstay of the “Doomsday.” He was selected for 11 Pro Bowls, and All-NFL choice for six straight years from 1964 through 1969 and again in 1971 and 72. He played in 292 pro games, included a Cowboy record of 196 straight regular-season contests. When you add 78 preseasons and another 18 in postseason, you have a heck of a lot of games and he missed just one, and that was in 1973 NFC title showdown against Minnesota when he had a bad hamstring injury.

He played five NFL and NFC championships in 1967 and 1972 and in Super Bowl V and VI. One of my lasting impressions that I have Bob Lilly was in Super Bowl V, when we lost the game to Baltimore and remember on the last play -- a field goal. Bob, like his teammates, had gone through several frustrating seasons of not being able to win the big one, which is a terrible tag to have. When that field goal went through the goal post and in his bitter disappointment, he almost threw his helmet out of the Orange Bowl. Well that demonstrated how much it hurt him to lose, and I knew right then that we had a great chance to win Super Bowl VI, which we did against Miami, 24-3. I am sure that that victory will rank as Bob's greatest pro football thrill, as it did for many of us.

He was born in a small town of Throckmorton, Texas, which is 150 miles northwest of Dallas, on July 26, 1939. His family moved to Pendleton, Oregon, before his senior year in high school, which had to be a very traumatic experience for him. But he overcame it, and he became All-Oregon in football and basketball his senior year. He returned to Texas and attended Texas Christian University and played for coach Abe Martin. He called him the best tackle he ever coached.

Dallas did not participate in the 1960 draft, but Bob Lilly became our first draft pick in 1961. He won NFL Rookie of the Year honors at defensive end and next year was his first Pro Bowl selection. But in mid-1963, I made the best decision I ever made as a coach. I moved him from defensive end to defensive tackle where he blossomed into what I considered the best tackle in the NFL. I believe that most coaches will tell you that one of their greatest satisfactions is to see one of their players after retirement make a successful transition to a second career and make a possible contribution to their community. Well, Bob and his lovely wife, Anne, and their children have done just that in their new home in Waco, Texas. Bob heads up his own company right now. He makes those great Black & Decker commercials as well as multitude of civic activity. It is my pleasure to present to you not only a great professional football player but one of the finest persons that I have ever known, for his enshrinement into the Pro Football Hall of Fame, Mr. Bob Lilly.

As we were riding in the great parade through Canton today prior to the ceremonies, it looked like we were going to have a downpour of rain. I looked over at Coach Landry and I said, “Coach, so many times in the history of our practices you have called the rain off because you have a direct line upstairs. And he called the rain off.”

I want to first in knowledge all my friends and my family who have come all the way from Texas, Oklahoma and various parts of the country to be with me. They have given much strength and much help in this very trying three days that we have had here. Trying because not only as a day-to-day routine that we have to go through, but because of the reminisce and nostalgia that is involved. For I can sincerely tell the people who were responsible for the Pro Football Hall of Fame how much and how wonderful these three days have been. It has been fabulous; it has been like a dream. It is something I don't think anyone would ever be able to understand unless they have been through it.

I just want to tell Coach Landry how much I appreciate the fact that he stayed up all night to fly in an airplane out here to introduce me today before you people, and the fact that he introduced me today has a lot more meaning than you would think, because there were basically three men in my life: my father, coach in college and Tom Landry. This is the tough part. My father died 10 years ago, my coach in college died a year ago. These were the three men who influenced me most in my life.

I would like to say hello to my mother who is in the hospital in my hometown. She had planned to be with us today. But was unable to. I would like to tell my brother and sister who are back with her that I realized during the years that I grew up there were many times I got all the attention, and I appreciate the fact that they were patient and that they did love me. I'm sorry; I just can't help it. Nitschke told me it would happen. I didn't believe him.

I'm going to get along to my pleasant subjects: the Dallas Cowboys, the team that drafted me; the coaches; the officers; the staff, all the people behind the scenes. The teammates who were there to encourage me during the lean years, people were so helpful to me during my career. The people, the coaches, the organization, the teammates were the responsible for getting winners. There's no question that all of us up here today are up here basically for one reason: that we belong to teams that were winners on those team of winners. And I think the Cowboy organization for their belief and trust in me as I started in 1961.

My family I want to thank them because there have been many, many days that I have neglected them when I was trying to prepare for a National Football League game or championship game, yet they also became stronger and better people and I wish to thank them. I wish to thank the heritage of the NFL. The people who founded it. The NFL, the people who played this game back in the years when he wasn't lucrative. To the people who worked so hard to make the NFL what it has become today. You know a lot of times. You have a very dim beginning and a very bright ending, and I think that is what is happening in the NFL and that is the reason for the Hall of Fame in the Super Bowl and all the wonderful things that happen in pro football.

To the people here in Canton, the people who founded the Hall of Fame, the people who have been responsible for the progress and growth, the people who have put on the tremendous ceremonies and have done all the work, I wish to thank you for making it such a wonderful event for my family and myself. And to the people in Canton, Ohio: You have been so gracious, so hospitable to my family, and I thank you. And you know, I guess to sum it up, I deserve just a small part of the award today because it took teamwork as it does in everything in the world, our country, our cities, our states all work because of teamwork and because we have a country which allows us the freedom to choose our occupations and our professions and as people who had the foresight to do things that were tough when they had to be done. I certainly thank you for listening to me and bearing with me today.