"I’m the best defensive end around. I’d hate to have to play against me!” 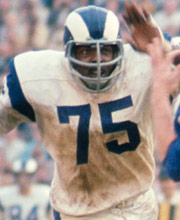 Deacon Jones, who had had an obscure college career preceding his 14th-round selection by the Los Angeles Rams in the 1961 draft, quickly blossomed into a superb defensive end. Blessed with speed, agility, and quickness, the “Deacon” became one of the finest pass rushers in the business. Yet had it not been for the chance observation of two Rams scouts viewing films of an opponent, he might never have had a chance to play pro football. When the scouts noted that the 6-4, 272-pound tackle was outrunning the backs they were scouting, they recommended Jones as a sleeper pick.

His college background consisted of a year at South Carolina State in 1958 followed by a year of inactivity in 1959 and a final season at Mississippi Vocational in 1960. Originally, the Rams weren't certain which platoon would be best for Jones but the Deacon quickly earned his niche as a defensive end and, for most of a decade, he teamed with tackle Merlin Olsen to give Los Angeles a perennial All-Pro left side of the defensive line.

In 1972, Jones was included in a multi-player trade with the San Diego Chargers. He was an instant success with his new team, leading all Chargers' defensive linemen in tackles and winning a berth on the AFC Pro Bowl squad. He also was named San Diego's defensive captain. He concluded his career with the Washington Redskins in 1974. The extremely durable and dedicated Jones missed just five games of a possible 196 regular-season encounters in 14 NFL campaigns.

Jones never played in a conference or league championship game during his career. 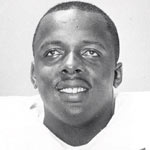 George Allen (Presenter):
Thank you Jim, Mr. Chairman, Mr. Rozelle, Mr. Mayor, Clergy, Enshrinees and past enshrinees, honored guests and ladies and gentlemen. In this year of elections when so many groups are debating the merits of hundreds of candidates, it is with great honor to participate in the election of a man that dedicated fans across the nation will agree was one of the finest defensive players in the history of modern football. David Deacon Jones number 75 a premier defensive end for the Rams Chargers and Redskins is the candidate. I had the great pleasure of coaching David on both the Rams and Redskins and I can truly say that regardless who wins the presidency this fall, the first cabine1 appointee should be Deacon Jones as Secretary of Defense.

David's accomplishments both on and off the field are a league and need no embellishment by anyone, but some things should be said and I am delighted to have this opportunity. As Secretary of Defense, Deacon was the most feared defensive player in the league. The opposition often built their entire offensive game plan around him. No one man could block him. It took two and sometimes three strong men to contain him. He was tough physically, he was even tougher mentally. David was not only strong, he was also very talented. He could play any position on the defensive team. With excellent hands he would have been an all-pro linebacker. He could have played safety and would have been devastating as strong safety. And there was something else you might not know about Deacon Jones, as good as he was on defense, I must tell you he was also a kicker. Near the end of a game with the Chicago Bears, we were leading comfortably David was asked to kick the extra point, the ball was snapped, David stepped and kicked the ball, it carried to the up-right, hitting the cross bar and fell over for a successful extra point. How many players have a perfect kicking record?

From time to time, all players play hurt, David was no exception. One of his greatest games was played in Minnesota with a temperature of 102. As a competitor he had few equals. In his eagerness to compete, David was always the first to reach the stadium and usually the last player to leave. By his pure energy of action, David was the inspiration leader on every team on which he played. 'When Deacon played the defensive team became the offensive team. More often than not, David's defensive team turned the ball over to the offense in a position ready to score. This added to an intense competition prevailed on the practice field where Deacon often challenged offensive backs to 100-yard dash and won. His role as a natural leader on and off the field made team discipline an easy job for the coaching job. He was respected, he was listened to, and he was followed. Truly no man entering the door of the National Football League Hall of Fame is e deserving or more a more qualified and certainly... his title Secretary of Defense is very true. As great as he was on the field, David has given evidence of championship breeding in his everyday life. He is a successful business man, he as a lovely wife, her name is Iretha, he is intensely involved in many community causes particularly miocenagraphis, a disease that struck down his long time teammate and a great defensive end in his own right, Lamar Lundy. David Deacon Jones a man who knowing only one way to go, 110% - David Deacon Jones, a man for all seasons but 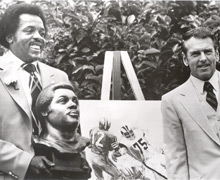 particularly for this season, David I welcome you to the National Football League Hall of Fame.

Deacon Jones:
Commissioner Rozelle. Mr. Schreiber, Mayor Cmich, fellow Enshrinees and Hall of Fame Presenter. Violence in its many forms is an involuntary quest for identity. When our identity is endangered we feel certain we have a mandate for war. In 1957 David Jones, a tough, unwavering outspoken student from the black South Carolina State College declared his own private war against the racial injustices that were prevalent at the time, the inadequacies facing him in education and in business and lodged his own campaign of aggressions against a group of society that would spark his persistence and determination to reinforce his identity for many years to come.  This quest for identity had its roots in Eatonville, Florida when at the age of 15 there were no neighborhood boys clubs, there were no local YMCA's, there were no Pop Warner little leagues and direct and channel that energy of eager youth and healthy aspiration.  Thus, the tribe and trial began with David forced the circumstances of his surroundings to formulate his own game plan, devise his own strategy, never losing sight of that vision of success. The self-determination would lead him to develop the nickname Deacon, to institute the head slap for which would eventually be at a loss and the creation of the team sacking the quarterback. It is with great pride that I reminisce with you today about that young tenacious student that remained true to his vision and is with great pleasure that I stand before you to receive the supreme recognition of the professional football world that honors.

There is a lady in the audience today who is and has been my second best rooter and support, although she knows little about the actual game of football and despises violence in any form, she is very proud of my success and because of her prayers and thoughtfulness and her admiration physically got me through it all, my mother, Mattie Jones. And to the lady who packaged the entire deal who sat with me through the bad and the good, whose admiration and devotion and encouragement has remained steadfast, who shares my determination and who is still hanging in there, my devoted wife, Iretha.

I would be remiss if I didn’t thank my college coach, Dr. Roy D. Moore who taught me the basic will to win.  My college teammates, some in the audience today, they deserve a great deal of credit for their help and support.  It has been said that the man who produces an idea in any field of endeavor, the man who discovers new knowledge is the permanent benefactor of humanity.  The man who discovers my knowledge and ability who challenges it and .finds it and without whose guidance I would not be here today is George Allen, thank you very much coach. And through the team efforts, a velocity that still permeates all aspects of my life today, a personal thanks to  each and every one of the fine athletes who played with me for 11 years of the Los Angeles Rams,  two years with the San Diego Chargers and one year with the Washington Redskins with whom I share those five points that make a champion, which are team work, hard work, pride, determination and competitive spirit and who shares with me as all champions do the feeling of excitement in solving problems, the delight of taking on a new challenge and the eagerness to meet another bard challenge and the eagerness to meet another hard attempt.  The Secretary of Defense would like to leave you with one last thought, every man is free to rise as far as he is able or willing, but it is only the degree to which he will rise. Thank you very much.