"There’s no thrill in football, like popping the ball to a receiver who has a step on his man in the open.” 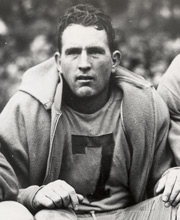 In the 1945 NFL Championship Game, Bob Waterfield threw 37- and 44-yard touchdown passes to lead the Cleveland Rams to a 15-14 victory over the Washington Redskins. That capped a season in which he was a unanimous All-NFL choice, and became the first rookie ever to win the league's Most Valuable Player.

Early in 1946, the Rams moved to Los Angeles. As the Rams quarterback – later splitting time with Norm Van Brocklin – Waterfield took the team to three straight title games, 1949-1951. The Rams won it all in 1951 with a 24-17 win over the Cleveland Browns in the title game.

As a passer, Waterfield was known for his ability to throw deep. He led the National Football League in passing in 1946 and 1951, finishing with career totals of 814 completions, 11,849 yards gained and 97 touchdown passes.

He was named first- or second-team All-NFL five times. One of the game’s most versatile players, he was also an ace defensive back for his first four seasons, a top punter with a 42.4 yard average, and a deadly place kicker. In eight seasons he totaled 573 points on 13 touchdowns, 315 PATs and 60 field goals.

For the next seven seasons, the Rams were pro football's most feared offensive team and Waterfield was the brilliant field general and precision passer who put points on the scoreboard. Always calm against even the greatest odds, he often led his team to come-from-behind victories.

In one 1948 game, the Rams fell behind eventual league champion Philadelphia 28-0. Waterfield rallied his team to a tie on four late touchdown passes. Waterfield proved to be a determined competitor in the pros. In the 1950 divisional playoff, although he was unable to practice all week because of the flu, he came off the bench and threw three touchdown passes in a 24-14 win over the Chicago Bears.

Thank you very much. Today it is Bob Waterfield' s honor and it's my privilege. He's a young man who led his UCLA team to victory to the Rose Bowl, and as a rookie quarterback took the Cleveland Rams to a Championship, then returned to his home in California and they won three straight championships. Not only has he become now a member of the Hall of Fame of football but long before that he was a family man hall of fame. That's the type of young man he is and it's with great pride and with great joy that I only participate in all the proceedings but to have the privilege of presenting to him the award and greeting him as one of the great members of the great I great football Hall of Fame. God bless you Bob and all of your listeners. Thanks for being here. Thank you.

Thank you very much Pat. And I would just like to take time now to say thank you to everyone, that has been responsible for this. All the people in the Hall of Fame, I thank you from the bottom of my heart and for my family and myself I want to thank the people from this wonderful town of Canton. It' s been a beautiful experience and really one of the highlights of my life. Thank you once again.