"I love the game. That’s why I play it. I might make more money in some other line of endeavor so it is not the 'sugar’ that keeps me at it.” 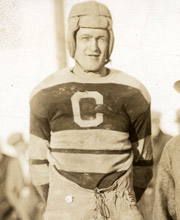 Guy Chamberlin played and coached in the earliest years of the National Football League when the only meaningful statistic kept was the teams' won-lost record. Winning was a category in which Chamberlin excelled. Of those coaches with 50 or more victories, Guy's 58-16-7 record and .759 winning percentage ranks among the best.

In his six coaching seasons, five of which were spent as a player-coach, Chamberlin also won four NFL championships for the Canton Bulldogs in 1922 and 1923, the Cleveland Bulldogs in 1924, and the Frankford Yellowjackets in 1926. Although Chamberlin's high school in Blue Springs, Nebraska, was not big enough to field a football team, he became a two-time All-America at the University of Nebraska.

Jim Thorpe, who had always been Chamberlin’s idol, lured Guy into pro football with the pre-NFL Canton Bulldogs in 1919. Chamberlin was one of the finest ends of his time. When George Halas began lining up players for his first Decatur Staleys team in 1920, Chamberlin was his prime recruit. He was big, tall and fast, excellent on both offense and defense and a 60-minute player.

After two seasons with Halas and the Staleys, Chamberlin came back to Canton as player-coach of the Bulldogs. Thorpe was no longer with the team but Chamberlin assembled one of the powerhouse elevens of the 1920s. Canton, with undefeated seasons in both 1922 and 1923, became the NFL's first two-time champion. The Bulldogs were sold in 1924 to a Cleveland promoter who added several Bulldogs’ players to his Cleveland team. Chamberlin led the rebuilt Cleveland team to the NFL championship.

In 1925, Chamberlin joined the Frankford Yellowjackets and a year later won another NFL title with a 14-1-2 record. Guy concluded his player-only career with the 1927 Chicago Cardinals and as a coach only in 1928 with the Chicago Cardinals. 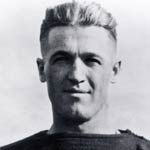 Drafted: Chamberlin played prior to the NFL Draft being implemented.

One of the most versatile, talented, and colorful of all football men - Guy. Mr. Chamberlin.

Well I've always listed, since I played here in 1919 with Jim Thorpe, Canton as my second home. And it's still a very friendly town. I am proud to be here again, and also this is the culmination of a lot of hard work, but I appreciate it and it is my highest honor. Thank you.