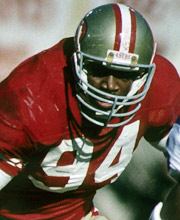 Charles Haley joined the San Francisco 49ers in 1986 as the team’s fourth round draft pick. He developed into one of the NFL’s most devastating pass rushers during a career split between the 49ers and the Dallas Cowboys.

He is the first player in NFL history to win five Super Bowls. Haley was a member of two 49ers’ championship teams (Super Bowls XXIII and XXIV) before his trade to Dallas. He earned three more Super Bowl rings during his first four seasons with the Cowboys.

Haley began his NFL career at linebacker and led San Francisco in sacks in each of his first six seasons. He recorded four double-digit sack totals with the 49ers including 12 sacks as a rookie and a career-high and NFC-leading 16 sacks in 1990.

He was moved to defensive end after his trade to Dallas and continued to excel at pressuring the quarterback. He added two more double-digit sack seasons in 1994 and 1995. Haley then suffered a serious back injury in 1996 that limited him to just five games. He retired after undergoing surgery.

However, after a two-year hiatus, Haley resigned with the 49ers as a backup defensive end for two playoff games in 1998. He came back to play one final season in 1999 and added three sacks to his career total.

When he walked away for the final time, Haley had amassed 100.5 sacks during his 169-game career. He was twice named NFC Defensive Player of the Year (1990 and 1994), voted to five Pro Bowls and named All-Pro two times, once as a linebacker and once as a defensive end.

He played in six NFC championship games over a seven-season period. He started at left outside linebacker for the 49ers in the 1988, 1989, and 1990 games and at right defensive end for the Cowboys in the conference championships in 1992, 1993, and 1994. He was inactive for the Cowboys’ victory in the 1995 NFC Championship Game.

Haley was a member of 10 division championship teams during his 12-season NFL career. His final season marked the only year he played on a team with a losing record. Prior to that, the fewest number of wins in a season any 49ers and Cowboys team recorded with Haley on the roster was 10.

1988 NFC – San Francisco 49ers 28, Chicago Bears 3
Haley started at left outside linebacker. He had five tackles and one fumble recovery.

1990 NFC – New York Giants 15, San Francisco 49ers 13
Haley started at left outside linebacker. He had three tackles and one sack.

1992 NFC – Dallas Cowboys 30, San Francisco 49ers 20
Haley started at right defensive end. He had one tackle and one pass defensed.

1993 NFC – Dallas Cowboys 38, San Francisco 49ers 21
Haley started at right defensive end. He had two tackles and one assist, one sack, one pass defensed and one forced fumble.

Super Bowl XXIV – San Francisco 49ers 55, Denver Broncos 10
Haley started at left outside linebacker. He had one tackle and two passes defensed in the game.

(at time of his retirement following 1999 season)

49ers records held by Haley
(Records through the 1999 season, Haley's final season with San Francisco (note: 49ers media guide includes players sacks prior 1982, the year in which the sack became an official sack)

Cowboys records held by Haley
(Records through the 1996 season, Haley's final season with Dallas (note: Cowboys media guide includes players sacks prior 1982, the year in which the sack became an official sack)

S San Francisco 49ers All other titles with Dallas Cowboys

* Haley played in the post-season only 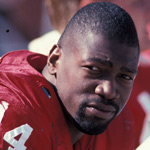 Thank you. I'd like to thank God for making this moment, making this a special moment for me.  I'd like to also thank the class of 2015.  You know, Mr. D., we were talking in the back, and I had this written down to tell that story that he just told, so now I got to change it, you know?

But I'd like to thank Mr. D. for these kind words, for stepping up to be the greatest owner that I ever played for.  He's passionate. He's very passionate about his team.  He's done so many great things for me, and I want to tell you one of the greatest things he did for me.  He took me down to Pebble Beach, guys, to play golf.  You know I don't know how to play golf.

So I'm driving the golf cart around, and I drive the golf cart up on the green, okay?  Eddie, Ronnie, Joe, all them, guys are laughing at me.  Some guy's flying behind us going like, “get off the green.”  I'm going what is he talking about?

I'd like to thank my ex wife, my four beautiful kids, Madison, CJ, Brianna, and Princess.  Karen, in 1988 she diagnosed me with manic depression, and I thought she was just like the group of guys that wanted to always put me in this box.  So we had problems after that, and I never really listened, nor did I step up to the plate and do something about it.  My life spiraled out of control for years, for years, but today, guys, I am getting back into the locker room, to my teammates, and tell them guys the mistakes that I've made, and that the only way that you can grow is that you've got to ask for help.

I walked into the league a 22 year old man with a 16 year old inside of me screaming for help, and I would not ask for it.  I would not ask for that help.  But today, guys, I take my medicine every day, and I try to inspire others to do the same, and that's because I finally listened and thank you.

My mom Virginia Haley, she's here.  Mom, would you stand up?  Hey, guys, she's smiling over there, but she's mean.  I'm telling you that.  I tell guys all the time.  I said the reason I've got quick feet is she put that switch back on my legs, you know.  My mom, she's my best friend, guys.  She knows everything.  She knows everything.  She prayed me into heaven.  She taught me how to get on my knees, how to pray; and guys, I love her to death.

My dad is    my dad had both his legs amputated, guys, and he couldn't make it here today.  But he's always set an example for me and my family because he doesn't let that hold him back.  He's a true champion and a true warrior.

And I'd like to thank my four brothers, George, Lawrence, David and James.  The reason why I'm thanking these guys is because they beat me up all the time.  They would not pick me to play in any of their games, so they would always call me Clumsy and Big Foot, and, guys, I used to go to church praying that they'd get hurt, fall out.

It never happened, so I changed my prayer.  I said, God, give me something to be great at, and it was football.  Then you know what?  The rabbit got the gun then.

My second great owner, Jerry Jones.  I know he had hip replacement.  I don't know if he's here or not, but I saw his beautiful daughter, Charlotte over there.  You know what, guys, Jerry has done so many great things.  My daughter, Brianna, she had leukemia, and Jerry opened up Cowboy Stadium to do the biggest bone marrow drive in the history to try to help me save my daughter's life.

Jerry, when I got traded to the Cowboys, the first handshake I received was Jerry Jones.  I got off the plane with eight cameras looking.  I couldn't see nothing.  And a hand stuck out, "Hi, I'm Jerry Jones, the owner of the Dallas Cowboys.  Welcome to Dallas" (imitating).

Guys, it was a five-minute ride to the hotel.  It took an hour and a half.  I know everything he's ever done in his whole life.  Part of the Cowboys was the equipment guys.  I love you. You know, and now my teammates.  Well, I've got a lot of teammates.  Carol Roberts, thank you so much.  You're a special friend with a heart of gold.  My best friend Andrew Alvarado, hey, you pulled me out of depression a lot of times, man.  I love you, man, and your sweet daughter, Mia.  My head coach in college, Charles and his wife is there.  Stand up, Coach.  Guys, he should have took me home the day I walked in.  I was hell on wheels.

I'd like to also thank the Wendorfs.  The Wendorf brothers, you’re greatest friends.  And guys, I had the greatest coach ever, Bill Walsh.  He's a Hall of Famer, but, guys, he was more to me.  He followed me my whole career.  I used to go to Stanford while he was the head coach.  He would stop and come over and listen to me whine, and, guys, at that moment where I didn't know whether to stay or go, he would not help me make that decision.  I'm still mad at him about that, but I'm going to get over that.

But two days before he died he called me still asking me what can I do to help you?  And I will always love him with all my heart.  He was really special to me.

George Siefert, a great coach, Jimmy Johnson, a warrior, Zulu, and then the best player/coach ever, Barry Switzer, my God, guys, he's a hoot.  I really loved him, man.  And my position coaches, Bill McPherson and Coach Hart.  Coach Hart took me out on the field, guys, the first day I got in camp, and he kept me out there hours.  He taught me how to be a pass rusher.  He slapped me upside the head too a couple of times, guys.  But Coach Hart is right here.  Guys, because of him, I'm here today.  It's because of Tommy Hart I'm here today.

I'd like to thank some of my teammates.  Tony Tolbert, Leon Lett, Darren Woodson, Russell Maryland, Michael, Troy, and Emmitt, Ronnie, Joe, and Jerry, Eric Wright, KT, and Guy McIntyre.  Guys, I'm truly blessed, guys.  I've played with some of the greatest players ever in the history of football, and I've learned a lot.

And the one thing I learned from all these guys is unselfish play, team matters.  We need to go back to that.  It's not about individuals, it's about team.  That's the only way we can have success.

In closing, I'd like to say one thing is I used to read two books of the Bible all the time, they were Psalms.  Because King David, when he said, "I walk through the valley of the shadow of death, I should fear no evil."  I always thought everybody was against me, so that was    he was the first warrior in the Bible too, so I used that.

And then Job, Conviction.  Hey, he was a rock.  He would not be moved, and that's the way I feel about football, guys.  When I step out on that field, guys, I was determined to be the best every play, not some plays, but every play.  Guys, thank you so much.