"I wanted to play so badly that I would have signed for nothing.” 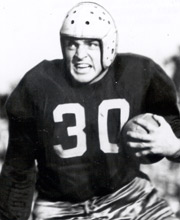 Clarke Hinkle was a hard-nosed player who loved to challenge his opponent. He was a pile-driving runner but he could turn the corner as well as hit the middle. Hinkle could catch the ball out of the backfield and was also the Packers' punter and placekicker.

As brilliant as he was on offense, Hinkle may have been even deadlier on defense. Backing up the Packers line, he was a vicious tackler against the run and terrific on pass defense – Hinkle proudly claimed he let only one receiver get behind him during his decade of pro football.

During his 10 years with the Green Bay Packers, Hinkle was named first- or second-team all-league each year. But, he is best remembered for his head-to-head duels with another great fullback-linebacker, Bronko Nagurski of the Chicago Bears. Nagurski was the prototype power runner of the 1930s but the rugged Hinkle, 30 pounds lighter, was determined to hold his own with anyone on an NFL gridiron. Hinkle's creed was "get to the Bronk before he gets to me," a tactic he used to perfection one day in 1934. Trapped on the sidelines by Nagurski, Clarke escaped his tackle by driving directly into and over him. The Bears' superstar was helped from the field with a broken nose and a fractured rib.

Hinkle, with his burning desire to compete and willingness to play in spite of painful injuries, always enjoyed the lasting respect of friend and foe alike. Nagurski himself turned out to be Clarke's staunchest press agent and even presented him for induction into the Pro Football Hall of Fame in 1964.

"They said I was hard to tackle, but here was a guy who didn't have too much trouble," Nagurski said of his Green Bay foe. When he retired after the 1941 season, Clarke Hinkle was the leading rusher in NFL history. 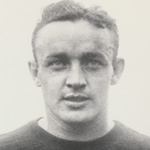 Drafted: Hinkle played prior to the NFL Draft being implemented.

Ladies and gentlemen, it's my plea sure to be back here again, last year as an inductee, this year as a presenter. Clarke Hinkle while he was at Bucknell was the leading ground gainer and scorer. In my book he was the greatest that I have ever played against. It is a great pleasure for me to make this presentation to Clarke Hinkle.

Bronko, I am proud to sit in the Hall of Fame with you. Today, I feel like the boy who has climbed the highest tree in the woods and conquered the forest. What else is there?