"I was such a good blocker, that the men they put in front of me—and some were stars who were supposed to be making a lot of tackles—they would have their coaches saying, 'why ain’t you making any tackles?’ they’d say, 'that bum Turner is holding.’ Well that wasn’t true…I could handle anybody that they’d put in front of me.” 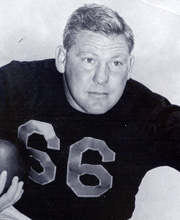 Clyde "Bulldog” Turner excelled as a premier center and linebacker for the Chicago Bears for 13 seasons. Yet had it not been for a fortunate set of circumstances while he was still a college player at Hardin-Simmons University, he might never have had the chance to play in the National Football League.

Pro football scouting was in the early stages in the late 1930s. Most teams relied on football magazines with their traditional pre-season All-America selections. Players from little-known colleges simply weren't included. Yet not one but two NFL teams eagerly sought Turner.

A Hardin-Simmons fan tipped off Frank Korch, a Bears scout, about Turner's abilities during his junior season. After watching Turner, Korch convinced coach George Halas the Bears should draft him. Meanwhile, the Detroit Lions were so sure they had convinced Turner to turn down offers from other NFL teams they didn’t even bother to draft him.

For the Bears, acquiring Turner in the first round of the 1940 draft proved to be a masterstroke. For both, the 1940 season marked the beginning of a period of dominance of their particular specialties, the Bears in winning championships and Turner in becoming the best all-round center in pro football. As a linebacker who was blessed with halfback speed, Turner, in 1942, led the league in interceptions with eight.

On offense, he was a flawless snapper and an exceptional blocker who could also play guard or tackle. Never was his versatility more evident than in 1944 when he was asked to fill in as a ball carrier in an emergency situation. He consistently ground out long gains, including a 48-yard touchdown romp. Three years later against Washington, Turner came up with what he called the favorite play of his career, a 96-yard interception return for a touchdown.

Jimmy, friends of this great group of football men that have gathered here, people of Canton, I'm about to introduce a man of very few words. He was a man of action and always has been as such. George Halas, when he was looking for football players, went into the state of West Texas out in west Texas on the plains, and he found this boy bulldogging cattle. And from 1940 he was a graduate of Hardin-Simmons College. From 1940 through 52, he's been an indestructible type in giving off his best in football, as the great center that preceded him into the Hall of Fame, Mel Hein, they were both the indestructible type. He was captain of the Chicago Bears for seven years. He played every minute, 60 minutes of every game until the last year he played. In other words, that was the one going both ways. In 1952, they elected to go two ways, so he participated both the old and new. He was an inspiring character, he was an intelligent person, he knew all the assignment of his own position all along the line, he was recognized with respect both by his playing personnel and likewise on and off the field of play. We had a hard time getting him away from his cattle ranch down there in Texas and I don’t know how much he's gonna say, but I'm going to give you one of the greatest football players and one of the most humble at heart. None other than the great Clyde ''Bulldog" Turner.

Thank you, Ed. I want to thank all of you very very much for this honor; thank you.