I gotta be mean. At my size, I can’t afford to play any other way. Unless I’m meaner than these big guys, unless I can intimidate them, I’d have no chance in the world against them.” 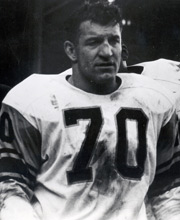 At 6-1 and 230 pounds, Ernie Stautner was smaller than most defensive linemen of the 1950s. Still, the Pittsburgh Steelers were willing to take a chance on the undersized lineman and drafted him in the second-round of the 1950 National Football League Draft.

It turned out to be a sensational pick. Blessed with excellent mobility and burning desire, the Boston College star went on to excel in the game of giants. For the next 14 years, Stautner was a fixture at defensive tackle, a veritable folk hero with long-suffering Steelers fans and a major factor in the Pittsburgh defense, one of the most punishing in the NFL at the time.

His outstanding play earned him first- or second-team All-NFL honors nine times. Selected to nine Pro Bowls, Ernie had the unusual distinction for a defensive tackle of winding up not once, but twice, in the NFL record book. His three career safeties tied him for a then all time high, and his 23 opponents' fumbles recovered placed him third on that list.

Yet Ernie's true worth on a football field could never be measured in lines in a record manual, for statistics can't measure such assets as competitive nature, team spirit, grim determination, and the will to win. Extremely resilient, the native of Bavaria missed only six games during his entire NFL career. That’s not to say he didn’t suffer a number injuries. His maladies included broken ribs, shoulders, hands, and a nose broken too many times to count.

When Ernie finally retired, the Steelers honored him by retiring his No. 70 jersey. It was something the team didn’t ordinarily do. But then, Ernie Stautner was hardly ordinary. A “throwback” to another time, Stautner was considered by teammates and opponents alike, as one of the toughest competitors the game ever produced.

I would like to take this opportunity to congratulate the enshrinees, and their families. Just before we came out on the platform, a mutual friend has said that this had been the first time that he had ever seen Ernie Stautner out of a uniform, and how well he looked. And I told him that I thought that he looked OK out of a uniform, but he looked much better to me in a uniform than he did out of it.

For 14 years, Ernie was not only Pittsburgh's greatest lineman, but one of the greatest lineman in professional football. For nine years he was chosen for the all-pro game and then I was trying to recollect in the 14 years that he played for us had he ever missed a game and I can't remember of him ever missing a game.

I remember one year in spring, not spring training, but in training season that he in the first week he had gone to the hospital and had his knee operated on but he was ready to play in our first league game. Not only did Ernie play defensive football for us but many times when the going (got) rough, which was often, he played offense too. He's been a credit to all athletes, and certainly been a credit to professional sports. I am grateful to Ernie for choosing me in bestowing upon him me honor as his presenter, and I'm proud now to give you Ernie Stautner. 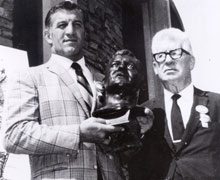 Ernie Stautner:
Thank you Mr. Rooney. Ladies and Gentlemen. There (are) three distinct events in my life which stand out and I'd like to mention them at this time.

The first, of which I have little recollection, was when my parents chose to move our family from Germany to this country. It was through their fortitude and initiative that I was able to grow up in a land where such an honor as this could come to me.

The second, was when I first was involved in football as a boy of 11 in the sandlots of Albany, New York. In the game of football, while to some, was just a mere game, became for me a strong motivating force which carried me on to Boston College and through 15 memorable years with the Pittsburgh Steelers and Art Rooney. Little did I really know then that football with all the pains and mental anguish that go with it would bring me such great personal pride and pleasure.

The third and finally and still an unbelievable event in my life is this occasion. It truly surpasses all my dreams and expectations. To be selected to Professional Football's Hall of Fame happens to very few and I feel extremely proud to be one of those chosen.

But, you know no one receives such a distinctive honor through their efforts alone. In my case, it was greatly through the efforts of my great owner, Mr. Rooney, my coaches who taught me well, my family who encouraged me, and my opponents who realistically made me work but particularly because of my teammates of the Pittsburgh Steelers that I am here.

My thanks to them and to all who were responsible for this – my proudest moment. Thank you very much.