"I can't explain my moves. I don’t think any good runner can. I can't copy anyone. I don't know what I'm doing until I do it then I can never repeat it. It's some kind of instinct. I look at me on film and say, 'Jeez that guy made a helluva move. What was that?’''

Floyd Little, a three-time All-America running back at Syracuse, was the Denver Broncos first round draft pick, sixth player selected overall, in the 1967 AFL-NFL Draft. Making him so appealing to the Broncos was the versatility he demonstrated at the collegiate level during his years with the Orangemen.

Little’s multidimensional talents quickly translated into success at the pro level. At first, Denver utilized Little more as a return man. As a rookie he led the American Football League in punt returns with a 16.9 average on 16 returns. He scored the only touchdown on a punt return that season in the AFL courtesy of his 72-yard return against the New York Jets. Little also returned a career-high 35 kickoffs for 942 yards. His combined rushing and receiving yardage total that first season was just shy of 400 yards.

As he refined his running style at the pro level, the Broncos continued to give him more carries each season. By his third year he averaged a league-high and career best 5.0 yards per carry. In 1971, he became the first 1,000-yard rusher in Denver Broncos history. He won the NFL rushing title that year as he finished with 1,133 yards on 284 carries and scored 6 touchdowns.

Not only did his rushing load increase but his ability as a receiver out of the backfield was an integral part of the Broncos offense. He caught more than 25 passes in each of his final five seasons. Little also had a knack for finding the end zone, something he did often especially during a three-year stretch from 1971 to 1973 when he scored a combined 32 touchdowns via rushing and receiving.

Little never played in a conference or league championship game during his career. 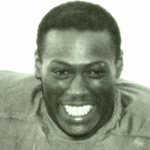 Marc Little (presenter):
Floyd Little can often be heard saying, "I do not choose to be a common man; it is my right to be uncommon if I can." That's my dad, an uncommon man. My name is Marc Little and I have the honor of speaking on behalf of my sisters, Christy, Kyra, and our entire family.

I honor these uncommon giants. They all saw something very special in Floyd Little, but his teachers said he wasn't smart enough. As an athlete, they said he wasn't tall enough or big enough to make a difference. My dad had a calling to greatness, a divine call that predestined this very moment.

When Floyd arrived in Denver in 1967, he was elected as captain as a rookie. The team, destined to move out of Denver, remained because finally they had a face to the franchise. And ever since then, Floyd Little was known as The Franchise."

Narrator (Steve Sabol):
During his nine years with the Broncos, the Franchise amassed over 12,000 total yards and scored 54 touchdowns. During a six-season stretch, from 1968-1973, Little rushed for more yards than anyone in the league and was named to two AFL All-Star teams and three AFC-NFC Pro Bowls.

Little:
His leadership also impacted our family. My sisters and I are all college graduates today. That's success. That's dad's legacy. But year after year, nomination to the Hall eluded dad until one night in August of 2008, his old friend, Joe Biden, stepped out on the stage at INVESCO Field for the Democratic National Convention, and Joe said, "Ladies and gentleman, I've always dreamed I'd stand in this place, but I was hoping I'd be standing next to my friend Floyd Little."

My heart of hearts I believe that dad's prayers to be considered by the Hall, as one of the best to ever play the game, were being answered and I was right. Dad, your blood, sweat and your tears, as a player and even as a father were not in vain. Congratulations pal; you're the wind beneath our wings. I am honored to present 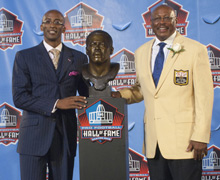 a giant of humanity, my best friend, an uncommon man, and my dad, Floyd Little, for induction into the Pro Football Hall of Fame.

Floyd Little:
Thank you. Thank you. I am still standing. And I give all the glory to my Lord and savior Jesus Christ. I am truly blessed to be standing here on this day to celebrate my journey as a person and as an athlete.

I only wish my mom and dad were here to celebrate with me. I know my mom is looking down on me today and she's saying, Floyd, I'm proud of you, you done good. I also miss my two brothers. Fred, known as Ranger, and Charles, known as Gitty. Gitty was the real hero. He served two terms in Vietnam and was a war hero. I miss my two brothers.

But God continues to bless me with three living sisters, Betty Jackson, Rosalie Johnson and Priscilla Goodson. These three ladies have been my biggest fans since I first put on a football helmet at Troop Junior High School. You have been my rock and strength on this journey. I could not have made it without your prayer and your support. Thank you for always being there for me.

I also have three very special and talented kids. You've already met my son Marc. He was my presenter. Marc is not like a regular son. He's also my lawyer, my advisor, and my best friend. Life would be real different for me if Marc wasn't around. I love you, man.

My daughter Christy who has blessed me with four grandkids, A.J., Skye, Blaze and Hayes. Christy is a proud mommy in training and has created a career teaching other mommies to be better mommies and I'm so proud of her for that. Christy, I am so proud of all the things you do because when I look at you I see all the things you do for our family. We are a close family because of you. I have been truly blessed to have you as my daughter. I love you, Christy.

My daughter Kyra. I have watched you perform on Broadway and on stages across this country. I have not seen anyone with more talent than you. You truly are a triple threat with abilities that make me proud to stick my chest out and say, That is my daughter. I love you, Kyra.

To my beautiful wife DeBorah, my friend, my partner and everything a husband can want. You stand shoulder to shoulder with me. You never wavered in your steadfast resolve, always willing to go to battle on my behalf, always ready to help me finish the fight. Thank you for always being by my side. You are my Hall of Famer and I love you.

No one travels this road alone. I can never have imagined the impact of a phone call I got from Tom Mackie's wife Emily. She called asking if I would consider meeting Tom for his 40th birthday because I was Tom's hero. Not only did Tom and I meet, but he became the co author of my first book, Tales from the Bronco Sideline. My biggest advocate for my Pro Football Hall of Fame consideration. Now Tom is my hero. Thank you, Tom Mackie, for all you've done. I truly appreciate it.

The list of those that had an impact on my life and career is long, but I must give thanks to Ernie Davis, to Jim Brown, to John Mackie, to Hal Williams, to Ernie Barnes, to Billy Thompson, and my coaches Dan Casey, Al Verdel, Jay Lou, Ben Swartzwalder, Lou Saban, John Ralston. A special thanks to the Hall of Fame committee, Jeff Legwold, Jim Saccomano, and my Syracuse family, Dr. Nancy Carter and Dr. Daryl Gross and the Vice President of the United States, Joe Biden. To all my classmates, all my teammates from Hillhouse High School, Bordentown Military, Syracuse University, and the Denver Broncos. To Pat Bowlen and the entire Bronco organization, and to all the Bronco fans around the world. To all my friends and family who are here, and those who could not be here, thank you for your loyalty and your support over all these years. I am truly, truly grateful.

There's no words to describe the joy of experiencing this final sports chapter in my life. This is obviously the highest honor any football player can garner. I stand here today celebrating my athletic life journey, and I understand the significance. Everything else pales in comparison. Every player wakes up wishing to have this honor. I encourage you all to continue to dream for this moment. I have been favored by God and by those who have had a say in what happens to me.

But the road was not always so easy and clear. I remember being a strong but angry young man in school. I used my strength in ways that became my weakness. After being kicked out of school, I had reached an impasse in my life. Everything was done. My hopes were shattered and done. And then I had a vision from my late father that came to me and said, Floyd, I've chosen you to take my place, to do what I could not do, and to finish what I could not finish.
I came to myself. With the help of those who saw the good in me, I was re-enrolled back in school with determination. Not only did I become the president of my class, but I started my journey as a leader in everything that I did, and I never looked back.

Because of those that encouraged me in those early years, I am here today. So I want to encourage you, every student, every athlete, every person who will hear my voice, don't listen to the naysayer. I had plenty of those. Don't listen to those that will judge you for your rough edges. Don't focus on your weakness so you won't become a victim. Find the goodness in you that says, "Yes, I can be a good student. Yes, I can be a good son and daughter. Yes, I can be a positive role model. Yes, I can." Because the good in you is better than the worst in most. The choice is yours. Be the best that you can be.

I truly believe that none of us is anything until the least of us is something. The great writer James Baldwin said, Naked I came into this world and naked I shall leave. We are bound to leave everything we accomplished in this lifetime behind, passing it on. So leave a legacy that you and your family can be proud.

I've given you the best that I've got. And I'm a better person for it. Thank you for being here with me and for me. I thank God for His favor today, and may God bless us all. Thank you so much.