"Just being there. Just winning all those games. That’s what it was all about for me.” 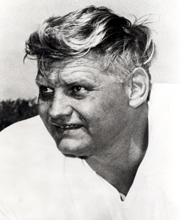 During the period the Cleveland Browns were dominating first the All-America Football Conference from 1946 to 1949 and then the National Football League in the early 1950s, Frank Gatski anchored the offensive line that powered pro football's most potent attack. He concluded his 11-year tenure with the Browns in 1956 and then was traded to the Detroit Lions for a final season in 1957.

The 6-3, 233-pound Gatski, who played three years at Marshall College before joining the U.S. Infantry in World War II, had to survive a grueling training camp tryout to earn a spot on the 1946 Browns roster. Then he had to serve a two-year apprenticeship behind the veteran Mo Scarry before Frank took over the regular center job for good in 1948.

Strong, consistent, blessed with a great attitude and exceptional pass blocking abilities, Frank was also durable. He never missed a game or a practice in high school, college or the pros. He was named to the All-NFL honor roll in 1951, 1952, 1953 and 1955 and played as a starting center in the 1956 Pro Bowl. Perhaps because he played at a comparatively obscure position, Gatski was relatively unsung through most of his career. Many of his more publicized teammates on both the Browns and the Lions preceded him into the Pro Football Hall of Fame. However, Frank can claim one signal distinction – he played in 11 championship games in 12 seasons with his team winning eight times.

During his tenure, the Browns won all four AAFC championships and were in the title game their first six years in the NFL. The Browns missed the playoffs in 1956 but Frank earned his eighth championship ring in 1957, when the Lions overwhelmed his old team, 59-14, in Gatski's final game in the NFL. 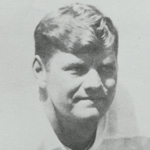 Drafted: Signed as a rookie free agent by the Cleveland Browns

Members of the clergy, members of congress, Honorable Mayor and members of the Hall of Fame and most distinguished honorees and ladies and gentlemen. On March 18, 1923 the son of a polish immigrant was born in Farmington, West Virginia, in the heart of the soft coal count. His name was Frank Gatski. Not was he to become one of the greatest centers that ever played the game of football, he was brought up with the old-fashioned virtues of loyalty, respect, discipline and hard work. I could go on and tell you about his high school days when you had to be tuff to survive in Farmington, West Virginia High School or the three years at Marshall College when Chip Henderson was the football coach, give him a chance to try out for the team. Frank often said that I took Henderson's offer and that's the only way I could get out of the coal mines and get a chance for a college education. He played for Cleveland after the war. He played behind Mo Scarry, who after the 47th season, he not only led the team, but he had an undefeated team and only Miami, the only team that became undefeated in a championship game.

I became acquainted with Frank in 1950 and thank God his locker was next to mine, Gibron and Gatske and a little smile on his face, we were great friends. Frank was not a very good talker, but when he talked, he had something to say. Eleven out of twelve championships and winning eight of them in 1952, 53, 54 All Pro. He was all pro by the 1950 P & A team for 13 years and Frank didn't need that. He was calm and collective. In '49 we played the Green Bay Packers in the first NFL and we had to call off the dogs. It was 49-0 and Frank said to us after the game, he said that we are here to stay in this league. We played the Philadelphia Eagles in the first game and they were heralded to beat us, and we beat them 35-10 and every time we took a kick-off, Frank was there to lead us down the field for another touchdown. We were the winners in the championship in 1950. Frank’s statement was “winning the championships… we want to win again, win another.” We were in championship games six years and we won three. Frank led his team by not what he said, by playing but up in the field. Paul Brown said many times that he would have to build a team up the middle arid he was the team leader on the field. When Gatski came out of the huddle, he gave great enthusiasm for leading the team and n1any times we can1e bet1ind the quarter or half, we told them how many points we want us to score on the team.

Not many people know Frank as the greatest arm wrestler in the world. When they have the tournament in Vegas, he could n1ake more money in one year than he did in the first six years. The old fashioned virtues, I would like to explain to you, the number one was his church, he was a polish-catholic and every time that he had a chance to go to church, he went and took me with him many times when church was not my environment. The family was number two. Right after the games, the home games, Frank would take a six pack and head down the highway for 250 miles to see his family and get back by 10:00 meeting time on Wednesday morning. The organization, not many people know that Frank led the organization. He said when you sit down and sign the contract you have to live by it. Many times, I would rebuttal a little bit, Frank would say to me, you live by the contract that you sign, and I expect you to do it. Respect, he did not recognize respect, he earned it from his fellow teammates and his fellow men. Regimentation and discipline, discipline and hard work ... Frank not only had discipline as a man but in football he took every step that was right to make it easy for us to block. I want to present to you Frank Gatski, a man’s man who thrives on toughness and loyalty who I can say he is my friend forever. Frank ....

Thank you, Abe, for that introduction. Members of the 1985 enshrinees, distinguished guests, ladies and gentlemen. Abe, I hope to see your number coming up shortly when you will be elected to the Pro Football Hall of Fame. There is a nice crowd here today. I am grateful to many people. Especially to my parents who brought me here. They gave me the strength and discipline to excel. My older brothers were my motivation. I want to thank Farmington High School, Marshall College, Auburn University, Cleveland Browns and Detroit Lions for their support when I played. I want to thank all the fans and the sports writers who followed me down through the years. And other thanks to Pete Elliott and the staff at the Hall for taking care of us and lining up all our details.

My football career started at Farmington High School when I first went out for football, they gave me one shoe that was a 10 and a half and one was a nine and that was my start. So, I have a claim to the Hall of Fame. Sam Huff made a statement that you’re having Doug Atkins and Abe Gibron that qualified you to get into the Hall of Fame. How about that Doug. My football was never planned… it just happened. I happened to be in the right place at the right time. I played with the Browns for ten years and the eleventh year I got traded to the Detroit Lions and we beat the Browns in the championship, so they claimed another ring. In my football, I had a lot of fun and I enjoyed football. I always liked hard work, so I liked to practice. It was never too hot or too cold. And I love to play football and if I had to do it over again and I had one more choice in my life, I wish I could put toggs on and I would run to California to play in another football game.

So, with further ado and from the bottom of my heart, I will say football I thank you very much and I hope I am worthy of this honor… I will wear it with pride. Frank Gatski thanks you.