"To me, Vince (Lombardi) was the difference between my becoming a good pro player and just another halfback. He turned my life around. Anything I accomplished in this game, I owe to him.” 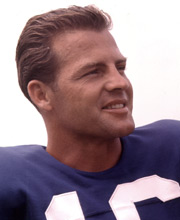 By the time that Frank Gifford joined the New York Giants as their No. 1 draft choice in 1952 he had already experienced unusual gridiron success in both high school and college. At the University of Southern California, Frank played both offense and defense and had won All-America honors as a senior.

It took only a few days for Giants coach Steve Owen to realize he had a prize as Gifford could run, pass, catch, play defensive back, and return punts and kicks. In 1953, he even played two ways in an era of one-platoon specialists, averaging almost 50 minutes every game.

In 1956, he was the NFL's Most Valuable Player as he paced the Giants to a league championship. Six times he was named first- or second-team All-NFL. Then in 1960, a severe head injury suffered in a game against the Philadelphia Eagles put Frank on the sidelines.

When he decided to retire before the 1961 season, there was every reason to believe the sparkling Gifford era was over. But in 1962 he returned to the game he loved. Facing and conquering the dual problems of regaining his touch after a long layoff and of learning a new position – he was switched from halfback to flanker to take advantage of his great pass-catching skills – Gifford attained star status once again.

No better yardstick of Frank's great versatility can be gained than from his eight Pro Bowl selections. He was named to the Pro Bowl at three different positions – first as a defensive back, then as an offensive halfback; and last as a flanker in 1964.

The Giants won big during the Gifford years and, while the team was loaded with many great pro football names, no one played a more dynamic role, year in and year out, in bringing the Giants success than did Frank Gifford. 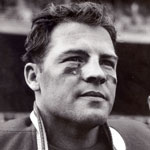 Governor Rhodes, wherever you are, distinguished guests, ladies and gentlemen. It is a happy privilege for me to present Frank Gifford for induction into the Hall of Fame. I hope my emotions will permit me to do it justice as I approach this with admiration and affection.

For me, for 25 years Frank Gifford has personified the son every father dream of, the player every coach dream of, the father any son would cherish. I like the man. ''Gifford on Courage'' a subject he knows a great deal about. All of us know him now as he's the sport telecaster who insists on letting the event tell its own story. In speaking of Frank Gifford in any of these facets or any facer of his life, it is necessary to speak in terms of humility. versatility, and excellence. These three characteristics are woven closely together in the pattern of Frank’s life. The excellence and versatility of the player are by no means diminished in the man. The humility Frank Gifford of the man was foreshadowed by the player. Frank was an All-American as a single-winged tailback. He was four times an all-pro T-formation halfback. In his second season with the Giants, he played both offense and defense. More than 50 minutes a game. At the end of that season, he was selected for the pro bowl as a defensive back.

Of that season, Frank recalls only a game in which he says Jack Butler beat him for the winning touchdown pass and is typical and his exploits as a running back he is most apt to recall the game in which as he says, ''If I hadn't fumbled we wouldn't have had to punt to him'.”

In any memory of Frank Gifford's, there is one picture that is always present, unwanted and starved but always there. It is a Frank Gifford very still at a field in Yankee Stadium. You thought he might die, you know he would never play again, but he didn't die, and he played again, and how he played. After one season he was the NFL comeback player of the year and he went on to climax his career by an eighth selection to the pro bowl in a third position offensive flanker. Frank has a very special place in the minds and in the hearts of the Giants and the Mara family. When he announced his retirement in March of 1965, my brother Jack, who was then President of the Giants, said Frank Gifford was one of the greatest players whoever played for the Giants. He had a dignity, tone and class during our entire operation. Even among stars he was a stand-out.

Three months later on a day when Frank Gifford landed in Hawaii for a long-awaited visit, Jack Mara died in New York. And the next Frank Gifford was back in New York. '' If it hadn't been for Jack Mara”, he said, ''I never would have gotten to Hawaii in the first place''. Frank as you join this distinguished company, I am sure that your place will be where it has always been, in the forefront, because as Jack Mara said, even among stars you are a standout.

Thank you. They told me this would happen, that I would completely forget what I was going to say. I wish I could think of something really funny, but I really can't. Wellington thank you very much.

Governor, ladies and gentlemen. I think all five of us, and I think you will have to agree it is quite an unique class coming in, have been pondering what we might say when we came to this moment. Forrest and I were talking about it a minute ago and Gale and I were sitting back in the quite solitude of a room, and I am sure we have our own thoughts of why we are here and how we got here. I think we all agree on one thing because I think I know all of these men well enough to know that we are deeply appreciative of the God-given physical ability, but it doesn't start there, and it doesn't end there.

I think all of us are aware as we go through life there are people who have incredible influence on us emotionally and also physically. You run a great risk at a time like this perhaps the greatest tribute and the greatest moment of my athletic life standing here. You run a great risk of overlooking so many people, but there are a few in my life that played such an important role. I think of a co-captain that I played with in high school who never had the opportunity to go out and play professional football but was also a number two draft pick as a junior. His name was Bob Carpey, my friend of a lifetime. I think of our coach, Homer Beatty who I think as I look back, taught me more football than any person I knew at least in terms of fundamentals.

All the guys that I played with at USC, the coaches there, the advisors I had, and several of them are here with me today, they, of course, meant so much to me. And then the New York Giants. As the No. 1 draft pick, I really did not know What I was stepping into. I didn't know if I could play professional football. Many people said that I couldn't and yet I had great friendship that grew out of my association with the Giants. I had great coaches, one man in particular. Marie Lombardi is sharing these steps with us today and I am sure wherever Vince is, and I know in spite of what the other members of the NFL might think, I know he is up there somewhere; he meant a great deal to my life, in fact turned my football life around for me, and it was one of the great privileges any player could have to play and know and perhaps even more than play for him to know a man of Vince Lombardi’s caliber.

I think too, of my own family, my two guys sitting down there Vicki and Jeff. Kyle was trying to get here but he's a long way away so he didn't make it, but I know he would have liked to be able to be here. Both Kyle and Jeff are better football players than I ever was in high school, yet somehow or other, they have their own wisdom, they have their own choice and they did not decide to follow that. Both of them already assume a great deal of success at what they do, and I have a tremendous amount of confidence for their future. I am so deeply proud of both my boys Kyle and Jeff and I am as deeply proud of this beautiful thing down here, Vicki.

Their mother perhaps should be in her own Hall of Fame because when I was running around getting jumped on and jumping on people, she was building them into what they are, and they are pretty classy. And I have said it before and anyone who knows me personally knows the depth of feeling not in terms of gratitude but the deep feeling that I have for the entire Mara family. Wellington's father signed me to my first contract, at least advised Wellington I am told. I was very close to Well's brother, Jack as I am with the entire family and Jack's son T.J. who is here with us today. They have my undying gratitude and, of course, my undying love.

I don't want to use this as a philosophical forum because it is not meant to be that, but I have a couple of deep feelings about the game of football and many of those feelings have been attacked. The game of football over the years has been attacked as so many other great institutions of our country have been attacked. The professional football, college football, street football, it offers a great deal to young people. There are five of us up here today to prove just that. There are over 90 more enshrined in the Hall of Fame that offers you something to strive for. You don't always get there, but sometimes when you strive hard enough what we do reach is better than the goal you set. It has the one unique characteristic I believe in our society today unfortunately, and that too is changing. When you go out on the football field and you are playing the game as best as you can, you don't look around and say is that man black or is that man white, you just care that it gets done and it gets done in the right way.

Football in so many ways has so many things to offer a troubled society and indeed that is what bothers me about the attack on this great game that we have all come to love.

Again, it is with deep appreciation to the election of the Pro Football Hall of Fame, to Wellington Mara for being here, to my guys and to all of you for thinking this is as important as we do, that I say thank you to each and every one of you and in particular to the four players behind me. I could have never been so fortunate to belong to such a class. Thank you each and every one of you.