"It was evident in my first year at Akron back in1919, that they didn’t want blacks in there getting that money. And here I was, playing and coaching and pulling down the highest salary in pro football.” 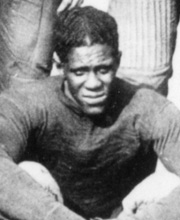 Fritz Pollard, an All-America halfback from Brown University was a pro football pioneer in more ways than one. The 5-9, 165-pound back, who led Brown to the Rose Bowl in 1915, turned pro in 1919, when he joined the Akron (OH) Pros following army service during World War I.  In 1920, the Pros joined the newly founded American Professional Football Association, later renamed the National Football League.  That season, with Pollard leading the charge, the Pros went undefeated (8-0-3) to win the league's first crown.

As a member of the new league, Pollard immediately earned a place in pro football history as one of just two African Americans in the new league.  In 1921 he earned another distinction becoming the first African American head coach in NFL history when the Pros named him co-coach of the team.

Contemporary accounts indicate that Pollard, an exciting elusive runner, was the most feared running back in the fledgling league.  During his pro football career the two-time All-America played and sometimes coached for four different NFL teams, the Pros/Indians (1920-21/1925-26), the Milwaukee Badgers (1922), the Hammond Pros (1923, 1925), and the Providence Steam Roller (1925). Fritz also spent time in 1923 and 1924 playing for the Gilberton Cadamounts, a strong independent pro team in the Pennsylvania “Coal League.”

In 1928, Pollard organized and coached the Chicago Black Hawks, an all-African American professional team based in the Windy City.  Pollard's Black Hawks played against white teams around Chicago, but enjoyed their greatest success by scheduling exhibition games against West Coast teams during the winter months.  From 1929 until 1932 when the Depression caused the team to fold, the Black Hawks had become one of the more popular teams on the West Coast.

Pollard's career was completed prior to the NFL's first championship game.

Up until 1933, the NFL's champion was determined by the best win-loss record during the regular season.

Pollard was a key member of the NFL's first champion, the Akron Pros who posted a league-best 8-0-3 record in the league's inaugural season in 1920.

* League champions.  Prior to 1932, the NFL's champion was determined by the best record during the regular season.

Other Members of the Class of 2005: Benny Friedman, Dan Marino, Steve Young

Drafted: Pollard played prior to the NFL Draft being implemented.

Fritz Pollard III (presenter):
Thank you very much. Mine is short and sweet. Not like last night's dinner.

In my 15 year quest, I'd really like to thank my son and my daughter who have put up with me and all my garbage. I'd like to thank Lane Tech in Chicago, Illinois, where it all began for my grandfather. I have heartfelt thanks to Brown University. My heart, my true love and his. The pro teams and teammates for which he played in the NFL. The loving fans. Of course the NFL and people of Canton. Special thanks to all the Hall of Fame staffers who give their undying support. All of the editors, sportswriters who put up with me educating them over the phone on my grandfather. A special warm felt thanks for the enshrinees for their remarks from the heart about my grandfather. Thank you. Special thanks to John Wooten and the Fritz Pollard Alliance. And to those of you wondering why I am not the one accepting this award, just like my grandfather did, I'm making substitutions for my family. And with that note, I'd like to bring on my cousin slash big brother, Dr. Steven Towns. 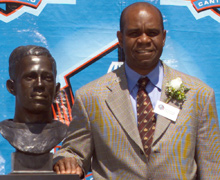 It is truly a daunting task to stand before this jubilant audience and attempt to communicate the essence of who Fredrick Douglass Pollard was and what his contribution was to the fledgling National Football League. I try to image how my grandfather would feel and what he would say on one of the most important days of his life. I can picture him standing here first acknowledging his family and then his fellow inductees – Steve Young, Dan Marino, and Benny Friedman. He then probably would look out in the crowd and see some of his old friends, teammates and players he coached – Duke Slater, Paul Robeson, Ink Williams and Joe Lillard. Sadly, this is not to be. So I must act as his surrogate, and try to do the celebration with grace and style.

The first question everyone asks upon learning of the election was 'who was Fritz Pollard?' Fritz Pollard was a 5-9, 165 pound running back out of Brown University. He had the speed of Tony Dorsett, the elusiveness of Barry Sanders, and the tenacity of Walter Payton. He was the first African American to play in the Rose Bowl. And the second to be named to a college All-American team, with the distinction of being the first in the backfield position.

During his two years at Brown, he led them from being doormats of their league to a true power in the east coast. Fritz honed his playing skills on the sandlots and streets of the north side of Chicago, where he attended Lane Tech High School.

While at Lane, he was all-county in football, baseball, and track. He gave credit to his older brother Lesley for not only teaching him the fundamentals of the game, but showing him the necessary survival skills for playing what is considered to be a brutal sport.

After leaving Brown, he served in the military and coached football at Lincoln University in Pennsylvania. In 1919 he received a telegram from cigar owner Frank Mead, who also owned the Akron Indians in the struggling pro league. This brought granddad back to football. Granddad's experiences with racism were no different from any other black person in American during his period.

During both his college and pro careers he was a target of multiple incidents of racial abuse. Many times he was the only black player on either team, and probably the only person of color in the stadium. He was singled out for rough play and endured racial taunts that were customary for the time. The haunting sounds of Bye-Bye Black Bird, a song that was sung in his college days, still stung until the day he passed away. The abuse was at times so bad that he had to be escorted to the field just before the kickoff. During his pro career, there were times when he had to change his uniform at Mr. Mead's cigar store or even in his car.

In spite of all this, he along with Jim Thorpe became the stars of the league. His spectacular runs, his elusive speed, along with his hard play earned the respect of all who played the game or saw him play. In 1921, he was officially the Akron Pros coach. But he also continued as their featured player, thus becoming the first black coach in pro football. During 1923 after leaving Akron, he continued his string of firsts by becoming the quarterback of the Hammond (Indiana) Pros, once again, the first of his color to play that position.

When injuries took its toll on Fritz's body, he was forced to end his career, but he wasn't out of football. Some time in 1934 onwhat was considered one of the darkest eras in sports a so-called "gentleman's agreement" was reached between the powerful owners of the NFL teams to begin the process of eliminating black players from pro football. And no African American played again until 1946.

Can you imaging not having these guys around for that period of time and how it damaged the game? My grandfather fought this policy and never stopped fighting for re-integration of the league. He even organized his own all-black team, the Brown Bombers and the Blackhawks, who played so-called exhibition games against the all-white National League football stars. His Bombers, featuring running back Joe Lillard who was the Jim Brown of that time were 19-0 in these matches. As a matter of fact, he had to tone his offense down so they'd keep playing them because they were running the scores up.

Two of the greatest moments of Fritz's life were his 1954 induction into the College Football Hall of Fame and the pride of seeing his son Fritz, Jr. become an All-American at North Dakota State and win a bronze medal in the '36 Olympics with Jesse Owens. Today's ceremony would have topped both of these moments.

My grandfather and Jim Thorpe were the highest paid players and the biggest draws in their day. He was unarguably the greatest player ever and even coached at the same time. His inventive plays moved the game of football to what it is today. Thorpe became the first commissioner of pro football and was inducted into the first football hall of fame. My grandfather became a footnote until today.

Grandpa, the crowds are cheering. The seats behind me and in front of me are filled your legacy. After today everyone will know the gifts you've given to football. From its earliest days from its crowd thrilling game-winning plays to a string of firsts. The first Rose Bowl, College Football Hall of Fame, Walter Camp's All-American team, coaching and quarterbacking, and at last but not least, pushing for African American equality in pro leagues. You've more than earned your place in history in the history of football.