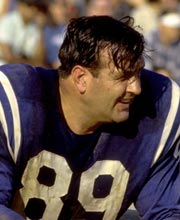 Ernest Marchetti had the somewhat normal parental fear that his son, Gino, might get hurt playing football. The protective parent advised him to "stay out of the other boys' way so that they won't hurt you."

Gino wound up instead as one of the game’s greatest and most feared defensive ends to play pro football. Marchetti, who played 13 brilliant seasons with the Baltimore Colts after one season with the Dallas Texans, was a brilliant all-around defender. He was adept at stopping the running play, but best known for his vicious pass rushing techniques.

He was known for clean, but very hard play and he was a particular terror on third-down, obvious passing situations. When opponents double-teamed him, or sometimes even triple-teamed him, that tactic only served to make the rest of the Colts rush line more effective.

Ironically, Gino suffered the most serious injury of his career - a broken leg - in the Colts’ famous 1958 overtime championship game victory, at a time when his parents were watching him on television for the first time. Gino made a key stop that ended a New York Giants' drive and gave the Colts a chance to tie the game in regulation time. Many thought this serious injury would prematurely end Gino's shining career.

As it turned out, all it really did was prevent him from playing in a then-record eleventh consecutive Pro Bowl. Gino had already been selected for the post-season classic but he had to miss the game, the only gap in a string of Pro Bowl appearances from 1955 through 1965. During the same period, Gino was named All-NFL nine times, 1956 through 1964.

Ladies and gentlemen. I cannot let this occasion pass without telling you that in professional football there are many highs and lows. There is a lot of agony and a lot of ecstasy, but of all the highs that I have been privileged to know by being permitted to be a part of this great sport, nothing has so impressed me as the Great Hall of fame, and how you people in this area feel about it. You have been warm and kind to all of us and we all appreciate it. It is indeed unfortunate that each and every person involved in football--from the youngest fan to our great commissioner, Pete Rozelle, who have been fortunate enough to be involved in this great game, could not come and see what we have seen this weekend. To see 200,000 plus people lined the streets from early morning to late afternoon, to view their heroes. And, I doubt that a day will ever come in my life that I will forget what I have seen this weekend. Now, about my dear friend, Gino Marchetti.

Ernest and Maria Marchetti Always had a somewhat normal parental fear that their son, Gino, would be hurt playing football and they advised him to stay it out and to keep out of the other boy’s way so that they won't hurt you. Every quarterback who played in the National Football League in the 1950s and early 60s wish that Gino had followed his parents’ advice. But, Gino Marchetti 6-4, 240 pounds of extremely talent did not listen to his father's advice and Gino wound up instead as the greatest defensive in the history of Pro Football. As selected by a special panel of experts in 1969, the experts say that a better pass rusher never lived and probably never will. When I retired Gino's number, I said to him and to the people in Memorial Stadium that he was a legend in his own time. To say to you that Gino Marchetti was a great football player doesn't begin to describe this man. It is like saying that the Taj Mahal is a nice place to visit, or that Abraham Lincoln was announced standing president of the United States. The thought is like the Taj Mahal can like Lincoln, Gino Marchetti is something special which is why he's being inducted into the Hall of Fame today. through the most of my adult life and particularly during my ownership of the Baltimore Colts, I witnessed closely the swings in our society, the changes in our young people--some moving up --some sliding inevitably, the question arose, what sets one person apart from another? Why does one prosper and another fail? I think that I have found that answer in Gino.

In the National Football League, he was an all-time defensive end at 6-4, 240 pounds, this was not big really compared to the current rosters. And yet, more than any single man, Gino is credited with creating the crashing style of the modern defensive end play. The way he got to the pastor has become legendary. Once an offensive tackle and an excellent one confessed that he spent the entire game trying to block Gino and never touched his Jersey. Marchetti played in every Pro Football game for one from 1955 through 1965. The one he missed was because of a broken leg in the 1958 championship game. right on the sideline he refused to leave until he saw his team tie it up in the final seconds of regulation time. Of course, he had saved that game with a never to be forgotten tackle on Frank Gifford in a critical third down-play. Not because God had given him a body better than others, but because he took what God gave him and got more from himself than he ever thought he would be able to give. Marchetti Was better than the man he played against.

The greatness that is in him will be with him will be with him for the rest of his life. And outstanding an unending commitment to excellence, a willingness to submerge himself individually within a group effort, courage, and acceptance of pain and love for what he is doing and a notation of achievement, respect for worthy adversaries and perhaps most importantly the realization that not all in life can be successful victorious. It was no great surprise that he came out of retirement in 1966 to help the Colts when they needed help, it was no great surprise when he was selected in 1969 as the greatest defensive end in 50 years of professional football. Gino was an enormously successful business whose commitment don't run 9-5. He is a fine community leader; he is a fine man and he is an athlete. And he is all there is of both. Gino, it is indeed an honor and a great one for you to be inducted into the Hall of Fame. Make it in the Hall of Fame in your first year of eligibility. But it is no less honor for the Hall to be graced by your presence. Congratulations, Gino, and God bless you.

Thank you very much. It's a long way from Antioch, California, I'll tell you that. I too would like to thank the people from the Hall of Fame who number one selected me and also for the courtesy that they have showed my family, my friends, and I. I think that when I first why is selected to the Hall of Fame -- it was great news. You know, to get somewhere where you felt you didn't belong, or you would never make it. You never dream of someday being here in Canton, Ohio, here with your friends. It was just exciting, but I don't think that it really hit me until I arrived here in Canton.

The people were so great an I think today when I wrote down in the parade that I had seen people applaud me that I didn't know and a kid there with the balloon and put 89 on it and I thought, my God what a great country with great people to be honoring me an athlete who was lucky enough and fortunate enough to do something that he loved to do for half a lifetime. And think of it, half a lifetime really, I played football and I loved every minute of it. I was fortunate enough to be associated with an organization like Baltimore, Carroll Rosenbloom, Don the great coaches and many great athletes there. Fortunate enough that they didn't believe in the old theory that a lot of people have today is that an athlete should be lean and hungry to play the game of football. Lucky enough for me that Carol grabbed me one time in San Francisco that is exactly the way he approached me, we were voting championship shares that day and I had gotten the call that the big man wanted to see me. So being nervous, you know as you work at like any other jobs in this country, that when the owner wants to see you, you say to yourself now what did I do wrong. So I went to his room and he came out dressed very casually and sat down and he said, “ Hey you dumb hillbilly, what are you going to do with your life?” which is true at that time, I was playing, and I was going home, attending  bar, working in a factory, very happy very content. And he showed me the way to better myself and make a life better for my family. And through him and the organization I have grown, and I think that any man or any player that was fortunate enough to be within that organization should be very thankful.

The other night I told this story, it really isn't a story, it is that I was at a banquet a few years ago in Baltimore when a guy gave a definition of a successful person. And he said that a successful person is somebody that loves to do something and is smart enough to get somebody to pay him to do it. So, I sat there and I thought--man that takes care of everything. You know if you want to be a bartender or a janitor or a mechanic and you are smart enough to get somebody to pay you, you're successful and I thought here I am just a kid smart enough to get Carroll Rosenbloom to pay me to do what I love. And, through football I have met a lot of great people and a lot of great friends, and friends I see and hear that travel far to share this moment with me. People that I would have probably never have met and I know will be friends for the rest of my life. I can't say enough, and God bless all of you. Thank you.