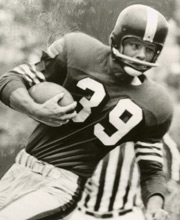 Hugh McElhenny was to pro football in the 1950s and early 1960s what Elvis Presley was to rock and roll. Known as “The King” (McElhenny that is), he had it all. He was an artist whose electrifying moves left opponents and observers spellbound.

McElhenny, a University of Washington All-America halfback, began his football career by rewriting the Pacific Coast Conference’s record book. A first-round draft choice of the San Francisco 49ers in 1952, Hugh made an immediate impression as a rookie leaving sportswriters groping for new superlatives to describe his exciting style of play. He recorded the season’s longest run from scrimmage (89 yards), the longest punt return (94 yards), and the top rushing average (7.0 yards per carry). Not surprisingly, he was a unanimous choice for the league’s Rookie of the Year honors.

Considered the greatest “thrill runner” of his day, McElhenny ran with a tremendously long stride and high knee action. His breakaway speed and unique ability to change direction at will left defenders dazed and confused.

In 1961, after nine seasons and five Pro Bowl appearances, McElhenny joined the expansion Minnesota Vikings. It was, all things considered, his finest season. With the Vikings he accounted for 1,069 combined yards and made his sixth trip to the Pro Bowl.

Two years later, as a member of the New York Giants, McElhenny realized a dream that had escaped him – playing on a championship team. Although Hugh’s knees were already shot, Giants coach Allie Sherman knew he would give the team “his very best,” something he did automatically his entire 13-year career.

When he retired after the 1964 season, McElhenny was one of only three players to have gained more than 11,000 all-purpose yards. Altogether, on rushing, receiving, kickoff returns, punt returns, and fumble returns, he totaled 11,375 yards — or more than six miles.

Mr. Mayor, Mr. Commissioner, honored guests and ladies and gentlemen. Before telling you a little of Hugh McElhenny, I would like to make one comment. Like all of us, I have had a great concern in the recent months and years about the future of our country, but I'll tell you, after riding in the parade this morning and seeing the wonderful young people that you have here in Canton, my fears are no longer there. I am sure this country is good for at least another 200 years. While we were leaving San Francisco to come back here, I asked our publicity director to give me a fact sheet on Hugh McElhenny. Well, he handed me 4 or 5 pages of records and statistics and looking at them, I was amazed at the accomplishments of this young man. But really, the statistics were hollow, because there is no statistic that can describe the beauty and the artistry of Hugh McElhenny running. He was simply the greatest runner of all time, but the magnificent thing about you is that he took this gift of God, nourished it, treasured it, and carried it onto his public. Now his knees don't bend quite as easily, but those great characteristics that made him a fine football player and makes him today, a great father, devoted husband, and real citizen. I take great pleasure in presenting to you, the King, hail the King, Hugh McElhenny.

Thank you, Lou, Commissioner Rozelle, all honored guests, ladies and gentlemen. I was – I Was asked several months ago but I would say here this afternoon, and I felt I did not need to prepare a speech, for a new as I stand here before you, emotional individual that I am, that this would happen to me. This is the greatest honor has ever been bestowed upon me , and my credit goes to the athletes that I played with, the second effort that they made to make my runs, my receptions the success that they were, and I also must thank the teams in which we played, my opponent, for all the mistakes that they made, to make me look good. Each one of these enshrinees here this afternoon, Jack Christiansen, Pete Pihos, and Tom Fears all bring back great memories of my football career.

Tom takes me back to when I was in Hawaii playing in the Hula Bowl Game, And I was playing against Tom as a professional, and he was trying, he was telling me that  “don't worry about it, we’re going to get you with the Rams for the bonus draft choice, don’t sweat it, I’ve already talked to the manager and everything’s straight.” Pete Pihos in 1953 Came in to break up a donnybrook, that happened between the San Francisco 49ers and the Philadelphia Eagles in San Francisco. I didn't know at the time that she was trying to break up the fight, and it was quite interesting to see the band come out of the stands to help me and Pete Pihos to stop the donnybrook. Jack Christiansen, the great defensive back that he was, and the Detroit Lions who kept the 49ers out of a divisional championship, and it was Jack Christiansen on three occasions that I remember, that kept me from scoring to give us the possibility of having a better shot at the division championship. My parent, my wife and my children accept this honor as I do.