"All I know is it was a means of survival for myself. When I went on the field, I went out with the intention of excelling." 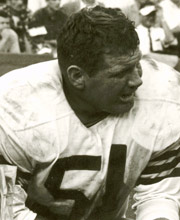 Jim Ringo had to be a little shaken back in 1953. His college team, Syracuse University, had been slaughtered 61-5 by Alabama in the Orange Bowl. Then, as a 20-year-old Green Bay Packer draftee, Ringo couldn't believe his eyes when he went to Packer training camp in Grand Rapids, Minnesota.

Between being lonesome and all "the bigger players competing for the center job,” Ringo quit camp believing he didn't have a chance to make the team. In addition, Jim didn't like the militaristic camp rules. Ringo wasn't welcome at home and, as he put it, "They didn't want a quitter. They said you should at least try."

Despite his 211 pounds as a pro freshman, Ringo found his way back to Grand Rapids and the team ... and, of course, the rest is history. Ringo played 11 years with the Packers and four more with the Philadelphia Eagles.

He made All-League seven times and played in 10 Pro Bowls. Never weighing more than 235 pounds, he utilized his speed and football intelligence to dominate his opponents. When coach Vince Lombardi took over the Packers in 1959, Jim was the only already-established All-Pro on the roster. Lombardi built his offense around Ringo.

Lombardi was thankful for Jim's speed; "A bigger man might not be able to make the cut-off blocks on our sweeps the way Jim does. The reason Ringo’s the best in the league is because he's quick and he's smart. He runs the offensive line, calls the blocks and he knows what every lineman does on every play." It's estimated that Ringo handled the ball (only the quarterback can match him) more than 12,000 times in his career, including around 1,000 snapbacks for punts or placekicks. And to think he almost quit football.

Well I don't know why his name is Ringo. why didn't he change it to “B”, and I would have been first! I am a man 77 years old and as the greatest general said, old never die, they just smell that way.

I am standing before you today in great appreciation. I understand that I'm the only 2nd in the high school coaches. Great pride - but with also great humbleness. I am at the bottom of the heap. There are a lot of Potatoes up at the top, but I am only thankful and remember somebody l1as to hold them up to help the man on the top.

Jimmy has reached the pinnacle to which you or anyone else who had anything to do might be proud of, you have to be. Because he came to us and wanted to play fullback, he wanted to play in the backfield. Well you know I see a lot of young people and so on and a lot of younger people. I'm glad you are here- this is an example of what you can do, without a great lot of kicking ability like Blanda or hang time of five seconds or whatnot- Jimmy was just mediocre. But in our coaching meeting, this kid Ringo was a string bean, not much weight period now he was a junior, what are you going to do with him. He still came out and hung on.

Which is what are you going to do with him? Will make him a center out of him. Hell, these centers live forever. So, on Monday I meant Jim in the Hall, I said Jim come here- his head went down. I said come on you are going to be a center, make up your mind, that's it. Alright, so after school we went down on the field and started putting him through some drills. Well, Jimmy like to block, he could throw a pass, but he had two left feet, he couldn't run. He was fairly quick, but he could be taught and he had a desire and that was the thing period so some of these things we started on the way up period now this was one of the adversities that he met and you people meet these things as you go through life, adversities. Alright, so we worked on him a couple of weeks and started him at center and had another good center, but he wanted a backup. The other center was Joe Szombathy, who is here with us today Ken is now in the athletic Department at Syracuse University and was a good end himself, but was a center remember. So, we started, North Hampton game, Ringo center. North Hampton comes out of the concrete region in Eastern Pennsylvania, cement kids they called them they are hardheaded I'll tell you, and they used a short hunt, this guy here, that guy there, this guy here, Bing trap, go. Now Jimmy don't chase those ducks, you stay at home. Went along the first half, and went over between the half, and the third quarter- out of there period now our field runs like this and here's the highway and across there is the post office. I said Jimmy if we didn't get you the hell out of there you would have been in New York in a mailbag. So Szombathy was in and stopped them- another adversity right!

Alright, now we talk it over and now the other wise guys on the coaching staff says, what are you going to do with them now? We are going to change Szombathy to an end. he's got good hands, he's quick, he can catch passes, he's a good blocker, why not and we will put Jimmy behind him. And we would go period now the flat starts. Income the newspapers, you know, “Szombathy to end, Ringo to center.” Couldn't figure that one out period now we go down to Bloomfield and this was where the Depuca’s came from. You know the Depuca’s. All right, Szombathy tore them apart period now you can go home break your arm and Pat yourself on the back, you made the right decision. Ringo center, Szombathy and period from that time on, Jimmy began going up the Hill, up the Hill. He kept working on these things and the drills and so finally one day he said, “why do I have to do this, I know how to do this?” You do this instinctively; you don't have to think. When this guy hits you there, you do this, you know it right off the bat.

Now then, through this desire you people who are here, particularly some of you younger boys, with not a great deal to pat yourself on the back with, you can do it. He overcame adversities and through sacrifice and hard work he had it and now he is at the top. I also want to say that Jimmy always wanted to be the best. He always wanted to knock someone on his can. He always wanted to be the best. This is the thing, don't ever get that defeatist attitude. This is the trouble now with a lot of people in our country. We want to be the best and we can be the best. In closing I want to thank all the people here who have been so courteous to me in my aging years and to my wife and the fine treatment that the people of Canton have given us. This is Jimmy's day, but I just want to mention one word if you will allow me to. Bill Walsh is going to be sitting down there on the sidelines and I coached that guy also. I was a center, Jim was a center, Walsh a center. Must have been a pretty good coach. Again, I want to thank everyone who made this day completely enjoyable for us and I want to congratulate the enshrinees because they are now at the top. Thank you.

One of the things I want to mention that I think is very important to me, very important to every enshrinee that comes to Canton, Ohio. Number one is the Hall of Fame committee and the Chamber of Commerce of Canton and all the committees that are here in the city of Canton. I have been in the National Football League for 29 years, but for the first time in 29 years, I feel that I was treated better here than I was in any other city in the United States. I have been in Chicago, in Green Bay and in New York. You have very fine people here and it is greatly appreciated by myself.

As I stand here as an enshrinee. I have a very weird feeling inside of myself, for I know myself as a person and individual to walk in here without the teachers of the past, I wouldn't be here. Also because of the people that have already been enshrined and made this game what it is today, I would not be here. So do the passing enshrinees that have been so honored, George Halas, Bronko Nagurski, etc. I thank you for having had the opportunity for me to be here today as it has grown. In 1963, when it started, I felt inside myself as I was playing with the Packer team man, I felt one day I may have the opportunity to be in the Hall of Fame. As I look back over my career, it seems I was created from what was said and I feel that it was created. Where I was not a good athlete. Wiz took his time, had confidence with me spend time with me and cared about me. As I went on to Syracuse University, I ran into another great man his name was Ben Swautzwalger. He was part of the 82nd airborne, he fought WW II and a few times he had some incidents that he told me about that were very courageous.

Again, he put some more of the substance inside of me, the will to win and what to be. So on to Green Bay I found a few years of faltering and finally a man came along that I had a tremendous amount of admiration for, Vince Lombardi. He put a lot of us together. I’ve had the material there, he gave us the instinct, the desire and the will to win and become the great champions and I feel the 1962 football team that walked on the football field that year was the greatest team that ever was in the National Football League and I am prejudice.

In ending, I would also like to thank my wife who over the years because of the sacrifice and dedication we have as ball players, our wives have to suffer. We are away all the time; she has done a tremendous job in raising my children. You notice I said my children because I feel they are pretty damn good children, if they were had children, I would say they are her children. But she has, she has taken a lot of time and I have taken a lot of time away from her and I know there were times when I couldn’t spend time with my family when I should have been with my family. But my wife permitted me to go out and do something I wanted to do, and I enjoyed doing it. I want to thank my mother for the God she gave me at early age. The important values and principles that I have used in my life period of the one thing I am sorry for this afternoon, my father took Hill the early part of this week and he is not able to be here. I would just like to say I know you are proud to be dad and if you are watching this on television, I love you very much. Thank you very much.